In ‘The Bear’ Kyo-don: Fighting Back 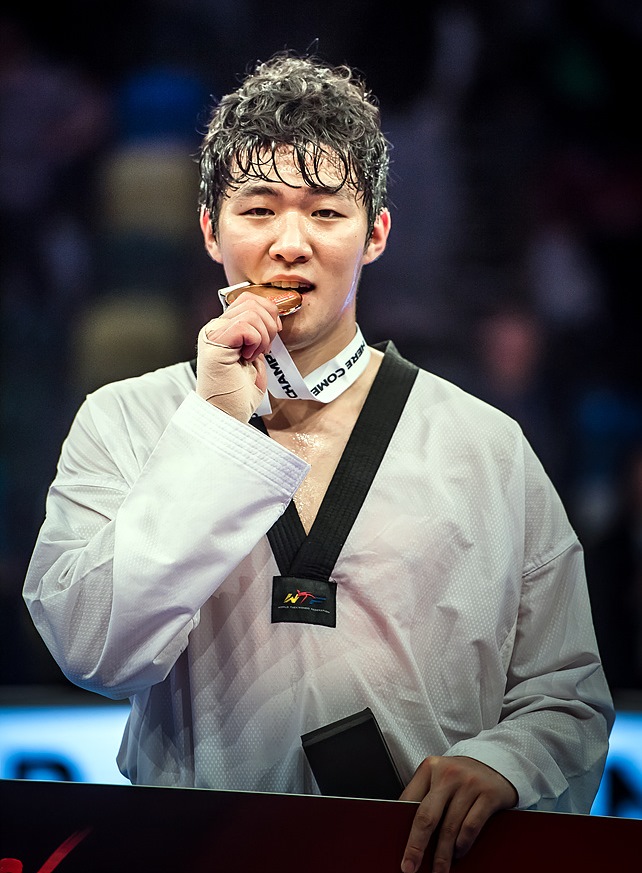 SEOUL, Korea (Nov. 15, 2017) – Team Korea’s Kyo-don In won gold against the world’s best taekwondo fighters at the London Grand Prix Series 3 - but the hard-kicking opponents on the mats were far less formidable than the deadly enemy In has been battling in recent years.

In started the sport at age seven, and by 10, was competing. Always a big, strong lad, he was nicknamed “The Bear.” An obvious talent, he decided to major in Taekwondo at the elite, martial art-focused Yongin University in Korea. As a fighter, he first came to global prominence when he won gold at the 2015 Summer Universiade in Gwangju, Korea.

Then, at the age of 21 in 2013 the hard-driving In discovered a lump on his neck. “I left it at the time, because I thought it was related to muscle, since I exercised hard every day,” he recalled. “But it stayed there for over a year.” He finally visited a doctor. After several examinations, he was told what the problem was. What he learned stunned him.

“The doctor diagnosed a malignant lymphoma, which is very bad,” In said. “I could not believe it! I never thought that I would get cancer.” In August 2014, at the age of 22, he underwent surgery. The surgery was successful but he was still not out of the danger zone.

Post-surgery, “The Bear” began the fight of his life.

From September to December, he underwent a range of traumatic treatments. “It was very painful,” he said. “I not only lost my appetite, even the smell of food made me nauseous.” As the treatment continued, In’s agony skyrocketed. “It got worse as it continued,” he said. “I thought it would be better to die if I had to receive more treatment, because it was so painful.” His thoughts drifted to suicide.

Adding further to his depression was the enforced inaction of a young man who had so recently been a best-of-breed athlete. Declining to stay in hospital, he remained at this student dorm during his treatment. Even though he could not train, he kept up his academic classes. Making things worse, he had not told his fellow students about his affliction. “Because of my hair loss due to the treatment, I always wore hats when I was in class,” he said. “So people often made fun of me.”

And the decline in his physical condition was impossible to mask. “One time, I met a referee who I know by chance and he said, ‘How can a taekwondo athlete have a body like you? You must manage your body!’” In was devastated. “I was very upset and had to cry in secret,” he said.

Yet he persevered with the treatment, and resumed training. The comeback was a struggle. “After I was told that I was cured in December 2014, I tried to fight in January 2015, but if I tried to move even a bit, I felt sick,” he said. “So I officially began fighting from March 2015.”

The speed of his return to form has surprised even In himself: “I got better result than I expected in Grand Prix series,” he admitted. 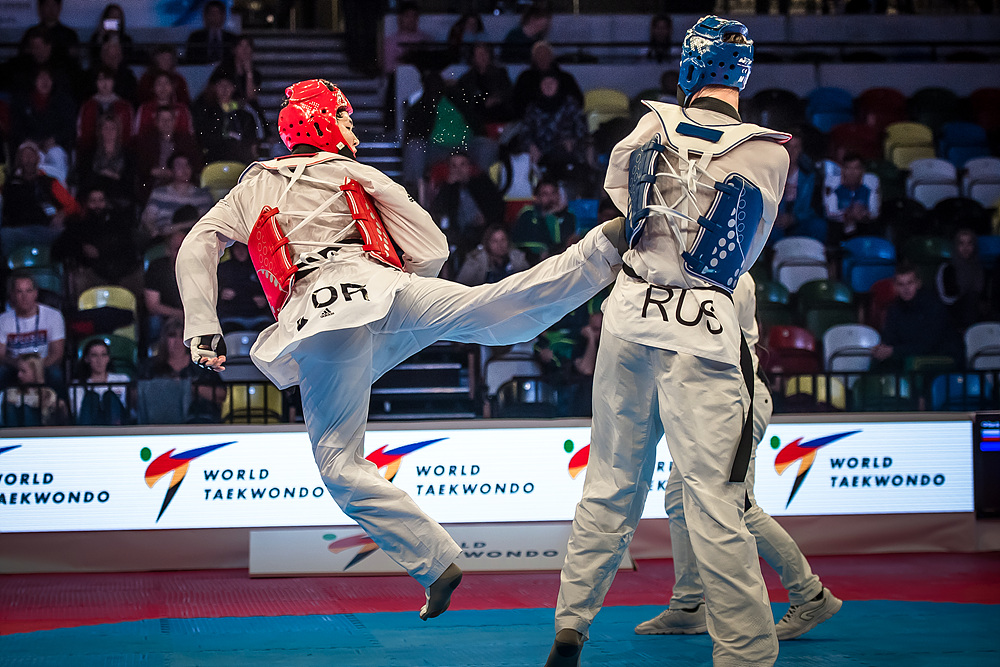 Unlike most athletes, who study their opponent’s in painstaking detail, In said he only cares about his own game. “My coach kind of gives up on me during competitions, because he knows that I just do whatever I want to do on the mats!” he laughed. His key advantage, he assesses, is timing rather than power. “I am tall but I am comparatively smaller than other athletes in my weight category,” he said. “My strength is that I know what to do at the right moment; I can figure out the situation very quickly and control the game.” In terms of kicks, he likes front and back kicks, and tends to pick up points for head kicks. When it comes to kick placement, he is more of a sniper more than a machine gunner: “I kick when I find the unguarded point of the opponent,” he said.

Now fully cured, his sights are set on the new Grand Slam series, though he confesses he does not really get what the concept of the nascent series is. He is also in the final stage of getting his masters in Physical Education at Yongin, “…but because I’m busy with competitions, I cannot focus on writing my dissertation!” After his competitive career finishes, he sees a future outside the game.

“I want to do something that is not related to taekwondo and I like meeting new people so I want to do my own business,” he mused. “A restaurant will be good – grilled pork belly!” In the sense of food, at least, In is lucky: “I play in the +80kg category, so I don’t need to care as much [about making the weight] as athletes in other weight categories,” he said. Then he added, “But, I still need to make shape!”

Having defeated cancer – In is now fully recovered, though he still undergoes checkups twice yearly – he warns that nobody should take life or health for granted.

“There is a saying, ‘Every word, indeed, is a seed,’” he said. “As I never thought that I would get cancer, I often talked about the disease very lightly and easily. But, as I was diagnosed cancer, I thought that I should act and speak carefully all the time: You never know what will happen to you, or to anyone around you.”