BURNABY, Canada (Nov. 18 2016) - It was unquestionably the most exciting final of Day 1 of the 2016 World Taekwondo Junior Championships.

In the male -48kg category, Jae-hee Mok of Korea stalked onto the mats to contest gold with Saran Tangchatkaew of Thailand. Some junior matches are genteel, low-scoring affairs. What was about to transpire, however, was a real fight.

Right after the opening bell, Mok attacked and scored to the body, going one point up and igniting cheers from his teammates. The Thai shot back with a fierce series of body shots. The tempo rose. Both lads were firing kicks with real venom. At ringside, even the most jaded, “seen-it-all, done-it-all” taekwondo masters and pundits had jerked awake and were following the action, blow-by-blow.

The Korean went two up, then appeared to land a face kick – but no score. His coach appealed; it was rewarded. Tangchatkaew fell twice and the round ended 6-0 to Mok. Round 2 was equally fast and furious with ax kicks, spinning back kicks and punches being unleashed by both fighters, but with no score from either.

In the third, Mok went up to nine points after firing a masterly body punch-head kick combo. In defense, his constant movement – he did not stand in one place for more than a second - and constant stream of attacks was making it impossible for the Thai to lock on his target radar. With the round only half over, Mok landed a picture-perfect ax kick to Tangchatkaew’s face, ending the match 12-0 and taking the gold on point difference.

It had been a bravura display of taekwondo: fast-moving, hard-hitting and deadly accurate, enabled by Mok’s technical excellence and empowered by his physical conditioning.

When you meet him, however, the 17-year-old from Songnam, Gyeonggi-do – the province surrounding Korea’s capital Seoul – is almost the complete opposite of his fighting persona. Shy, quiet and self-effacing, he left his coach, Kyung-bae Lee, to do most of the talking. 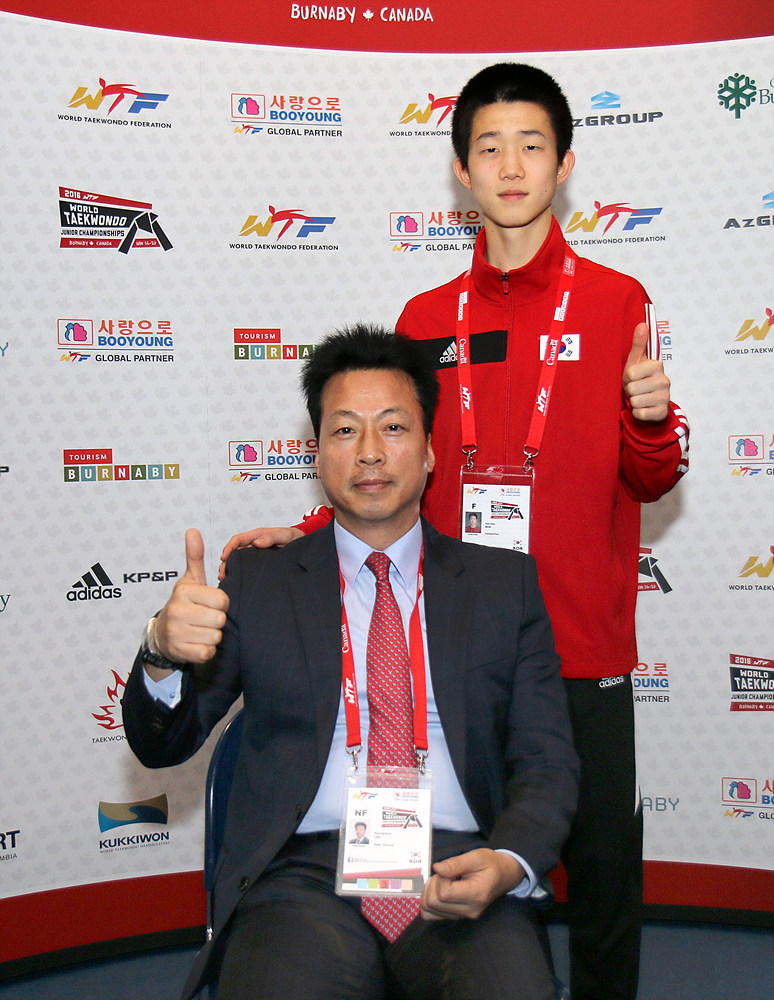 “It was the first time for me to fight these athletes,” Mok said. “Me and my coach studied them a lot in the preliminaries and semifinals.” “The Thai guy was really good at the ax kick,” added Lee. “We studied him, and the idea was to avoid his ax kick.”

What really lit up many ringside observers was Mok’s body punch-high kick combination attacks. “It is my favorite technique,” he said. Although the punch is the lowest-scoring attack in taekwondo – to the point where some competitors neglect it almost completely – it is a specialty of his school, Pungsaeng High School. “In our school, we use a lot of punches, we focus on exact punching skill,” said Lee. “If the referees see it, they don’t score it - but if they hear it, they score it!”

Mok’s technical excellence may be down to his long apprenticeship: He has been playing taekwondo since elementary school. As well as his punch-kick combination attacks, and a wide arsenal of kicks, he has superb lateral footwork. He also has an ideal physique – fast and light – which explains his agility and stamina. As the icing on the cake, he has sound tactical sense, which has enabled him to take out a string of taller athletes. “To fight a tall person, when they raise their opposite leg, you have to attack to beat them to the kick,” Lee explained. “Taller athletes are slower.” 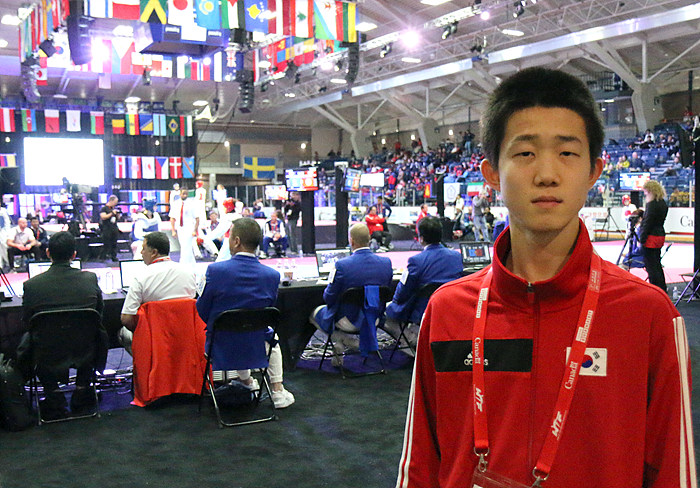 In the future, Mok knows what he wants to do. “I want to major in taekwondo at university,” he said. “Everybody [parents and coach] has agreed. And I want to be a coach after competing.”

Still, his chosen vocation means a tough, ascetic existence that few teens would be willing to tolerate. Under Lee’s tutelage, after school, he trains seven days a week: “The only time off is Sunday mornings,” Lee said.

As a result Mok, unlike his contemporaries, has no time to hang out at the mall, hit the karaoke room.“I don’t have any hobbies,” he said. “In my spare time, I just like resting at home.”