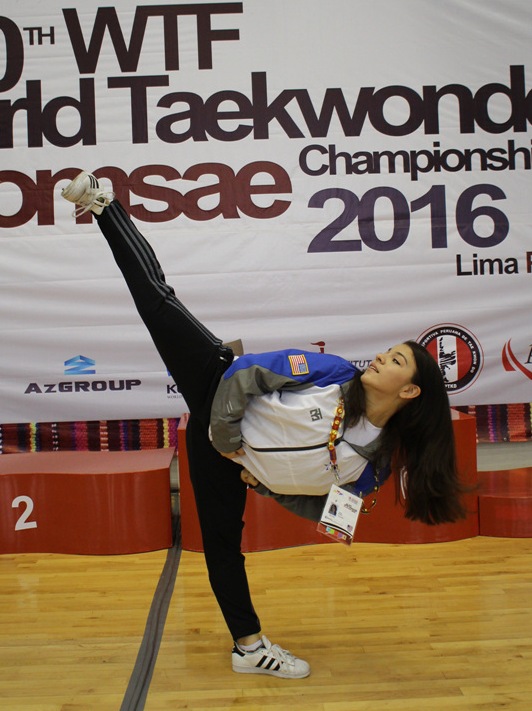 (November 11, 2016) - Poomsae taekwondo has grown dramatically in recent years and for athletes like 20-year-old American Adalis Munoz the hope is that one day the discipline might – just might - join kyorugi in the world’s ultimate sporting arena: The Olympic Games.

“I’m excited to see how poomsae is growing,” Munoz said. “There has definitely been a rise in competition over the past two years. I hope that poomsae will be included in the Olympics.”

While there are, as yet, no indications that poomsae will get the Olympic nod, the growth was very clear to see at the 10th World Taekwondo Poomsae Championships, in Lima, Peru, which boasted a record number of athletes and teams.

Munoz took gold in the individual freestyle – defending the gold medal she had won at the two years earlier. Having now won gold at two consecutive world championships and many national titles, Munoz is now a well-established name in freestyle poomsae.

She trains six hours a day and is always pushing herself to improve. “I worked hard on jumping higher,” she said. “I wanted to showcase getting comfortable in the air and not being afraid of going higher.”

Munoz choreographs her own routines with her mother. Only then does she share them with her coach, Barbara Brand, to check what looks good and what does not – the end result is 80 percent of her final program comes from herself. This allows her to focus her routine on what she believes are winning elements such as soaring jumps and cartwheels - while making sure the routine is “practical” and not too “crazy.”

Munoz believes it’s important there are effective fighting applications in her routine: “That’s part of tradition.” But it is the freedom freestyle offers her that really attracts her to the sport. “Freedom to express yourself, with your music choice,” she advised. “If you want the audience to feel something, you put in emotion.”

At just 20, Munoz continues to hope that one day she will have the chance to express herself and light up the audience on the Olympic stage.