Saul ‘The Spine’ Gutierrez: ‘I Love to Fight!’ 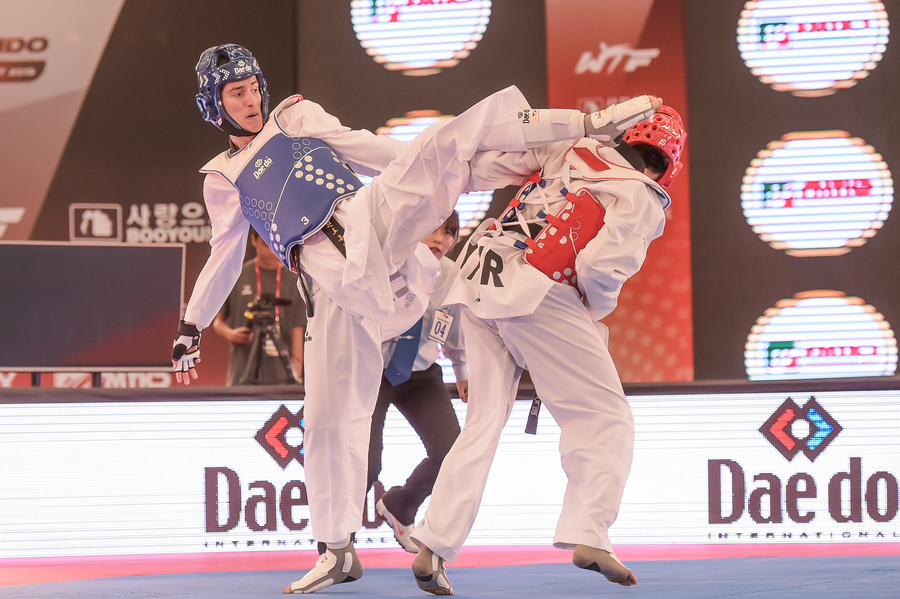 Mexico’s ‘longest’ fighter won his country an Olympic berth at the Grand Prix Final, but knows that he will have to fight again to qualify for Rio. Still: For a kid who loves scrapping, that is hardly a problem

Every year, Mexicans celebrate their most famous festival, the Dia dos Muertos (“Day of the Dead”), which features revelers dancing through the streets made up or dressed as skeletons. On Team Mexico, there is one man who may not have to dress up as a skeleton - and who never has to worry about making the weight. “My nickname is ‘Espina’ (‘spine’),” said Saul Gutierrez with a laugh. “Because I am long, tall and skinny!”

A native of Queretaro, the attractive central Mexican town that hosted 2014’s Grand Prix Final, Gutierrez took up taekwondo at age 10. “I always passed by a taekwondo school and I would stop by and watch the fights,” he recalled. “That is how I got into it.”

And fighting was in the blood, for like many athletes drawn to contact sports, Gutierrez was, in his youth, a natural with his knuckles. “I love to fight, I have always been that way,” he said. “Not just in school, but also sometimes with my neighbors, I used to fight in the street.” This suggests that the sport-combat outlet that taekwondo offered may have saved him trouble in later life. Does he still fight? “Not now!” he said. “Just taekwondo. “

Aged 22, he cites his major competitive achievements as bronze at the World Championships and silver at the Samsun Grand Prix – then his chance for glory came in front of a hometown crowd in Mexico City at 2015’s Grand Prix Final.

In the final of the male -68kg division – one of the sport’s most competitive categories - he faced off for gold against Korea’s Dae-hoon Lee. “The Spine” was taller, but it was Lee who piled the pressure on early, attacking forward with a stabbing side kick, varied with turning and oblique kicks. Lee went one up, then two up, then three points up with separate body kicks. Round 1 ended 3-0 to Lee; Gutierrez looked frustrated.

In the second, the Mexican used his height and leg length to his advantage, connecting with a head kick for three points, evening the score and delighting the crowd. With both fighters raising their work rate, the board rang up 4-4.  A head kick appeal won Gutierrez a further three points, ending the second round ahead, 7-5.

Round three started with a well-conditioned Lee looking dangerous as he tried to force the Mexican off the mats. Gutierrez was dropped to the deck and Lee closed the gap to a one-point difference - then scored again, evening the board to 7-7 at the end of the third. That took things to golden point but it was Lee who looked fresher as the two came out. The Korean connected with a body kick, earning golden point and gold medal.

He was rueful about his loss to the Lee – one of the most consistent fighters in the sport as well as one of the most popular, having twice been voted the WTF’s “Man of the Year” by his peers.  “Against Dae-hoon I felt good, I was doing the right things, but I got tired at the end,” “The Spine” said.

He also praised Lee’s technical versatility. “He has many different components to his fights, can do cut kicks, he can do spin kicks,” Gutierrez said. “He is a very good fighter, he has very good conditioning and a lot of strength.” The two competitors are rivals only on the mats.  “Sometimes, when we got to Korea, we say ‘Hi!’” said Gutierrez. “But only a little bit, because of the language.”

As a head-hunter himself, Gutierrez is a crowd-pleasing fighter. “My favorite techniques are face kicks,” he said. “I like spinning kicks but I don’t do them; for my height, they are difficult to do, I am a little bit slow.” He cites his height and flexibility as his best physical attributes; when it comes to mental game, he says he is patient and cool under fire.

Although his performance at the Worlds and the Grand Prix won the Mexican NOC a Rio berth, “The Spine” knows he is not automatically qualified for Rio: Given taekwondo’s popularity in Mexico, the national team selectors have a deep talent pool to draw from. “I am going to rest for the rest of December, then get ready for the Olympic trials in Mexico and focus specifically on each opponent,” he said.  “We have many top players in the top 10 and top 20 rankings, so we will all have to fight.”

In the rough-and-tumble of full-contact taekwondo, “The Spine” has taken his share of knocks. Like many – perhaps most – athletes gearing up for the Olympic challenge, his biggest concern over the coming months is avoiding damage. “I do worry about injuries,” he admitted.  “I have fractured my hand many times: the right-hand knuckles twice, the little finger once, the wrist once.”

Outside the dojang, Gutierrez is a student, studying business administration, as well as a soldier (rank: private) on the Mexican government’s sport sponsorship program.  How about the ladies? “There are many girls!” he laughs. “Actually, only one,” he adds quickly. “And she is a keeper.”

His ambitions are similar to those of many athletes on these pages. “I want to go to the Olympics and win a medal, and if I win a medal I am out!” he said. “I want to finish university and become a politician; I want to bring sport higher up in the state of Queretaro - that is both a dream and an ambition.”

But regardless of Olympic glory, the one-time scrappy kid will probably continue to enjoy taekwondo. “I like that it is a martial art, so all the athletes are focused and respectful and disciplined,” Gutierrez said. “I like everything about it.”

He pauses, then adds:  “I don’t like poomsae, though – only the fighting!”