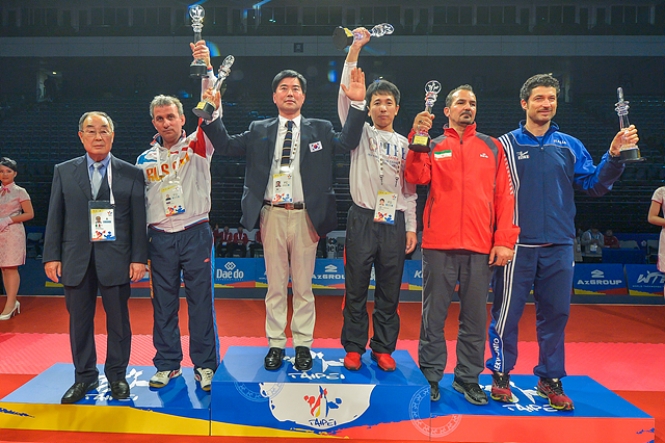 Korea took both the men's and women's overall titles at the 10th World Junior Taekwondo Championships in Taipei City, Chinese Taipei, which concluded its four-day competition on March 26, 2014.

The Great Britain came next with two golds and two bronzes for a total of 41 points. China followed with one gold and one bronze for a total of 36 points, while Germany ranked fifth with two silvers for 36 points.

The four-day biennial championships, which took place at the Taipei Arena in downtown Taipei City, attracted a total of 793 athletes and 472 officials from a record 107 countries. A total of 90 international referees officiated at the championships.

In the junior female -46kg weight division, Russia's Victoria Khan came from behind to beat Thailand's Napaporn Charanawat 3-2 in the final match to earn her country the gold medal. The bronze went to Iran's Nahid Kiyanichandeh and Spain's Tamara Miquel in the category.

In the junior female -55kg weight category, Croatia's Ivana Babic came from behind to defeat Korea's Geum-byeol Lim 11-4 for the gold medal. Iran's Mahsa Jeddi and Turkey's Fatma Saridogan won their respective countries the bronze medal in the same division.

In the junior male -59kg weight category, Korea's Seok-bae Kim defeated Thailand's Nutthawee Klompong 7-1 in the final match for the gold medal. In the same division, the bronze was shared by Iran's Reza Jafarpourzarrin Kolaei and Poland's Albert Millert.

In the junior male -63kg division, Brazil's Edival Pontes needed a fourth, golden-point round to earn his country the gold medal as he came from behind to tie the score 9-9 against Russia's Soso Kvartskhava in the final seconds of the third round. Turkey's Hakan Kavurat and Italy's Simone Crescenzi shared the bronze medal in the same category.