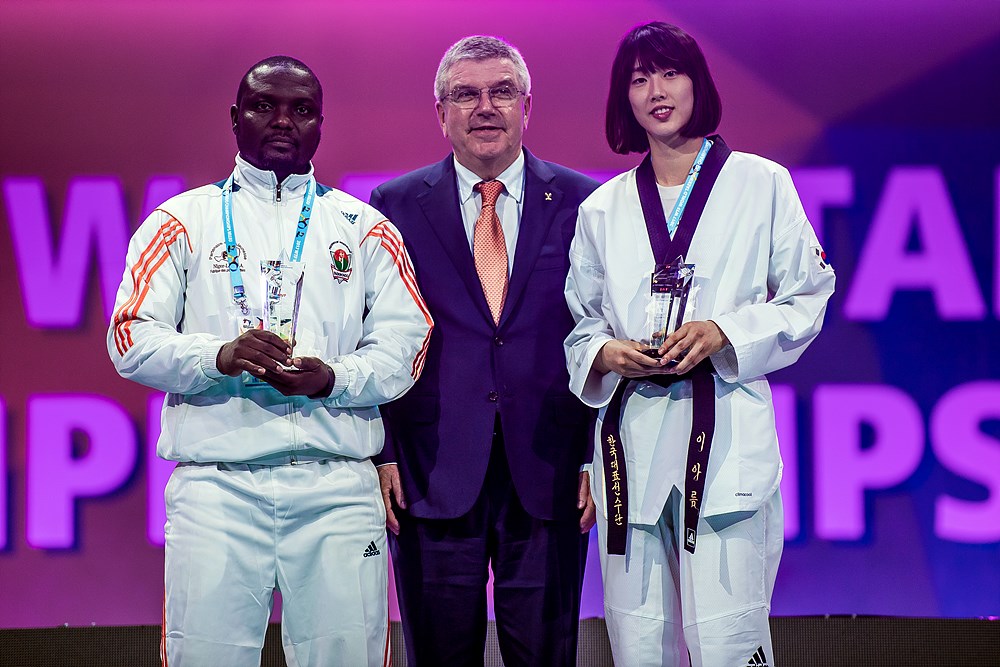 Closing Ceremony: A Spectacle of Taekwondo

Seven days of high-octane sporting action at Taekwondowon in Muju were concluded by a closing ceremony that featured spectacular demonstrations.

The ceremony got underway with a deafening performance of traditional Korean music, sung by a national treasure. Next up was the International Taekwondo Federation Team. Their performance included synchronized group poomsae, self-defense moves, breaking and a comedic staged fight. 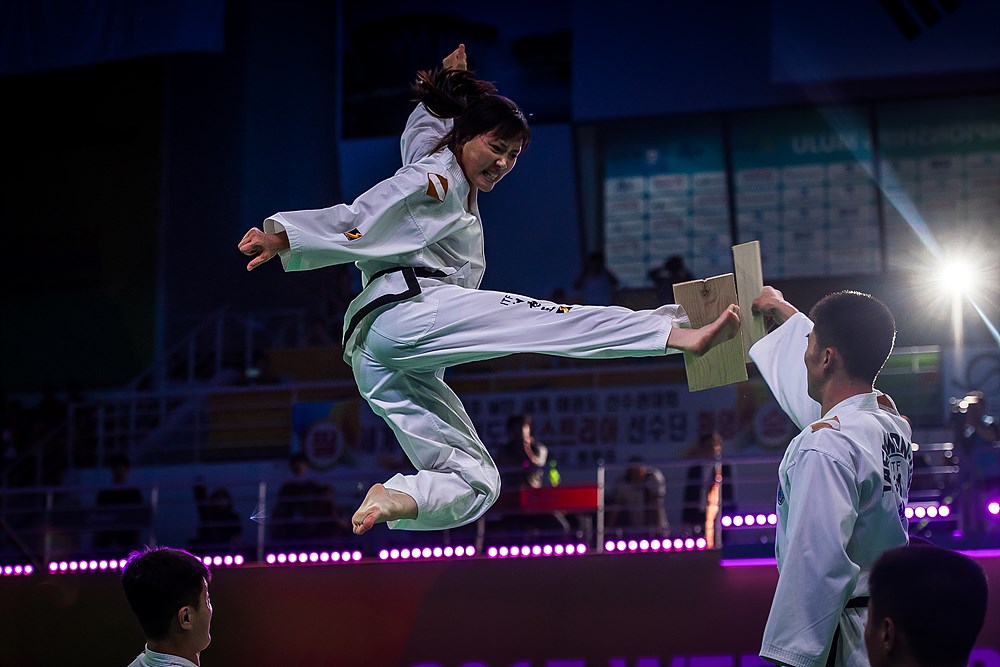 The World Taekwondo Demonstration Team followed with their usual slick presentation – equal parts athleticism and showmanship. It included stick fighting, banner dances, group poomsae, self-defense, freestyle flips, tricks ‘n kicks - and of course the group’s trademark high-altitude breaks. The performance featured a kaleidoscope of colored doboks, and was set to music - thunderous, evocative and funky as the mood of the demo shifted.

A photo session followed with the ITF and World Taekwondo demonstration teams and VIPs, including International Olympic Committee President Thomas Bach, World Taekwondo President Chungwon Choue and ITF officials, before a Mixed Gender Team demonstration match between Spain and USA. This high-tempo, action-packed “battle of the nations” format is an event that World Taekwondo would like to see enter the Olympics. Spain emerged victorious, 43-24.

With the opening ceremony having been attended by South Korean President Moon Jae-in, the highest profile guest at the closing ceremony was visiting IOC President Thomas Bach.

Muju featured “exciting competitions, great sportsmanship and unforgettable moments,” Bach said. Addressing the athletes, Bach said: “You amazed us with your performances and the energy that defines your sport…We have seen that taekwondo, more than ever before, is a global sport with athletes form 183 countries, and 26 countries winning medals. You are a powerful example of the universal appeal of taekwondo.” He finished by noting that, “Sport has the power to change the world.” 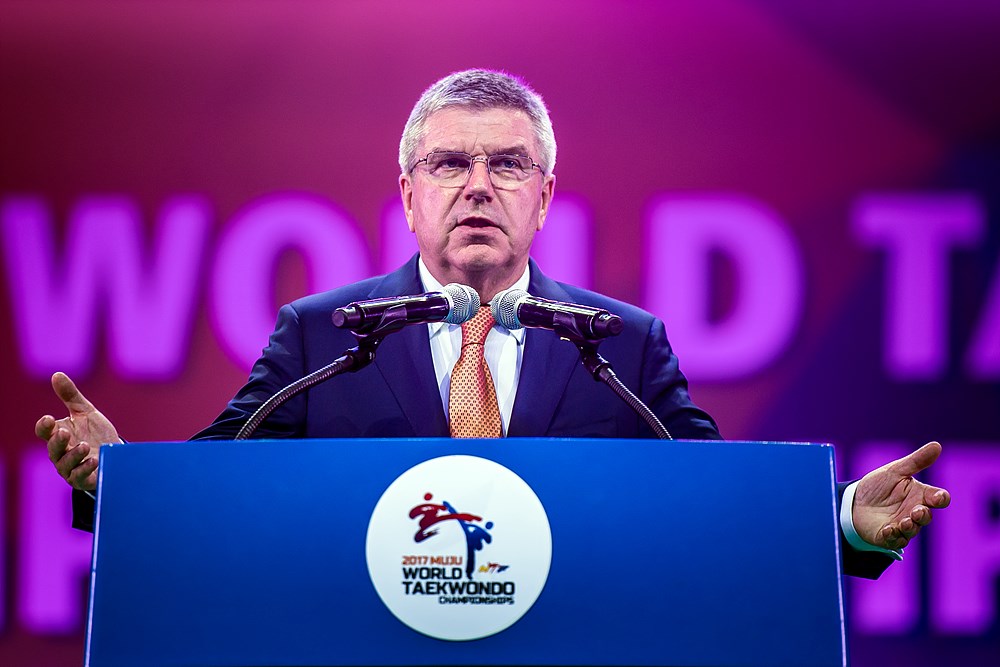 Korea’s Minister of Culture, Sports and Tourism Jong-hwan Do thanked the world taekwondo family for realizing “the promotion of peace through sport,” and thanked Bach and the IOC for realizing the 2014 meeting in Nanjing, China, that led to ITF-WTF cooperation. He added that he is looking forward to the World Taekwondo Demonstration Team attending the ITF World Championships in Pyongyang, this September.

The speeches were followed by a promotional video for Manchester, Great Britain, the host of the next World Taekwondo Championships in 2019. The championship flag was then handed to a representative from Manchester.

Finally, the championships were declared closed by representatives of the organizing committee and a blast of ticker tape descended on the field of play. And that was it for the 2017 World Taekwondo Championships in Muju, Korea. 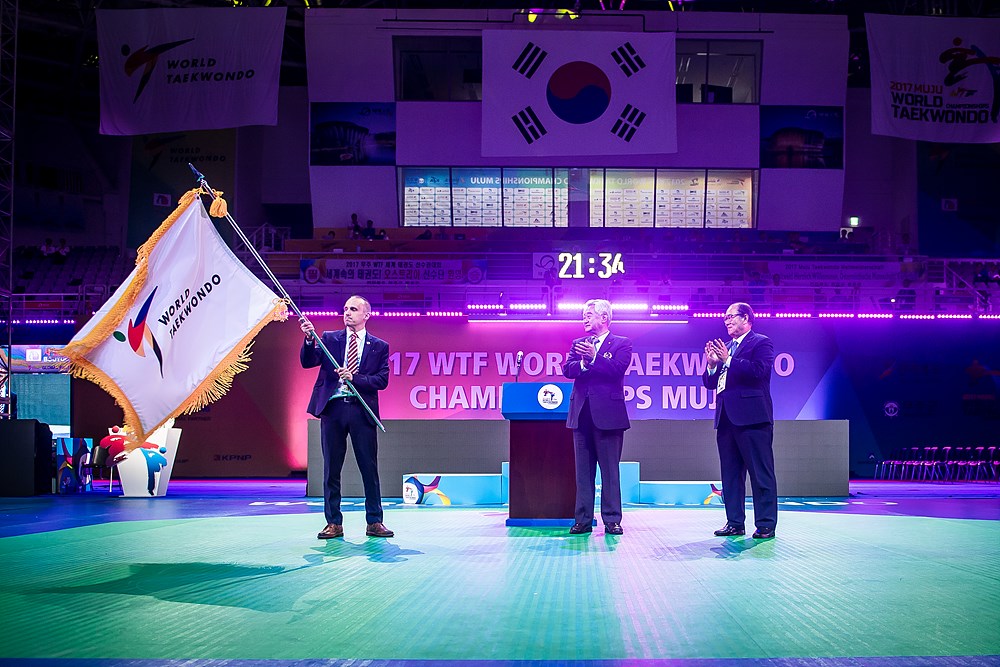 The seven-day festival of fight featured 183+1 teams – the “+1” being a refugee - making it the largest championships in the sport’s history. The WTF took the opportunity to reveal its new logo at the championships, as it begins a global rebrand from “WTF” to “World Taekwondo.”

The championships featured new rules instituted after the Rio 2016 Olympic Games and designed to add more spectacle to the game. The consensus on the sidelines was that the new rules have achieved what they set out to do to a large extent - although the officiating will need some fine tuning before Tokyo 2020.

The tournament took place in the Muju Valley in Korea’s southwest, noted for some of the nation’s loveliest scenery. The venue, Taekwondowon features accommodation, restaurants, training facilities and a taekwondo museum, making it the world’s largest purpose-built taekwondo center.

To entertain visitors in the breaks between matches, spectator engagement was in full swing outside the venue, with food stalls, sportswear vendors, a musical stage featuring genres as eclectic as traditional dance performances and Beatles tribute bands - even a taekwondo virtual reality experience center.

The top players from the championships will next meet and do battle in the elite Grand-Prix Series 1 in Moscow in August.