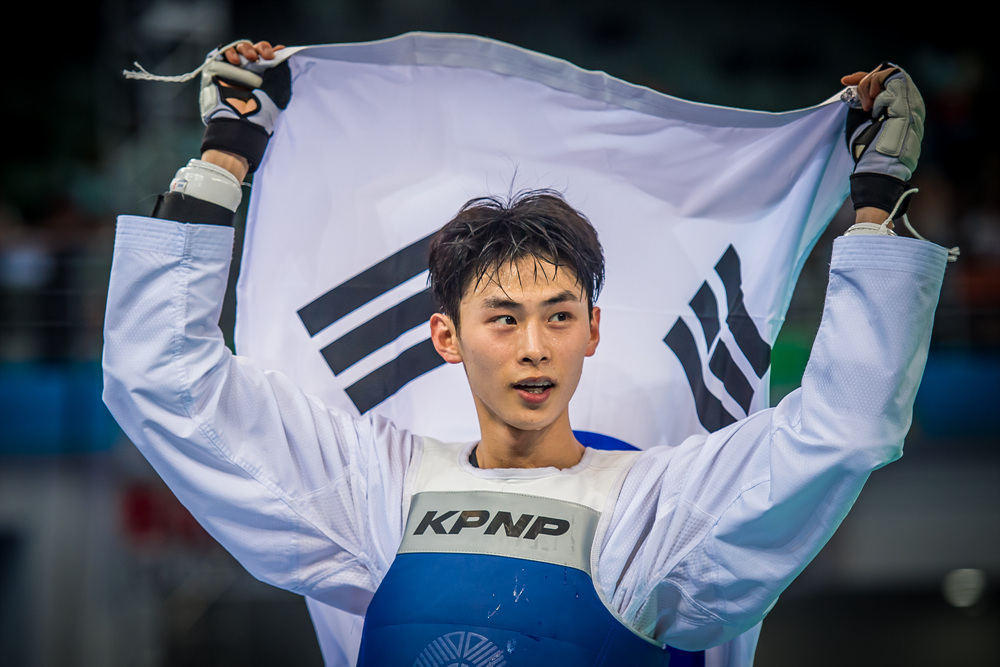 The lanky, softly spoken 22-year-old leveraged both luck and effort to grab gold in Muju. After a relatively easy fight in the semis – he beat Italian Vito Dell’Aquila, 16-0 – he faced a stiff challenge from Iranian top gun Armin Hadipour Seighalani. The two showcase very different styles: Kim with his dual-legged kicks and smart footwork, versus the sniper-like front foot and tactical smarts of the Iranian. 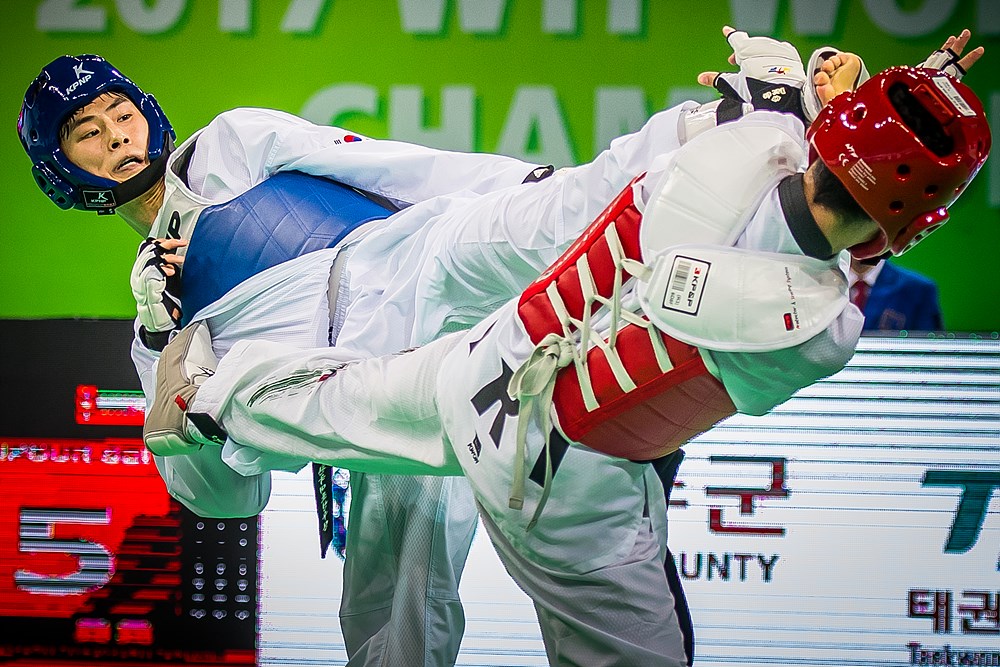 The Iranian struck first: two points with a cutting kick to the trunk. Kim got one point back, then was dropped to the mats by Seighalani’s side kick, losing another point. In the last seconds, Kim struck back to the body, ending the round 3-3. In the second, the score rose to 4-4, the Iranian landing the kicks but being forced off the mats by the forward-pressuring Korean. Then Kim landed a superb round kick on the Iranian’s face – a sneaky, out-of-nowhere strike - and suddenly Seighalani was in trouble. The second ended 9-4 to Kim. Round three saw a high work rate, with both kicking and pushing, Kim forcing the smaller Iranian back. A penalty took the score 10-5 to Kim. The Iranian launched a last-minute charge, with serial attacks and spinning kicks, but it was too late: the defending champion kept his crown and took home another gold, 10-6.

Speaking the following day, Kim opened up – a little – about his preparations for the championships, the first top-level competition to feature the new rules adopted at the start of 2017. 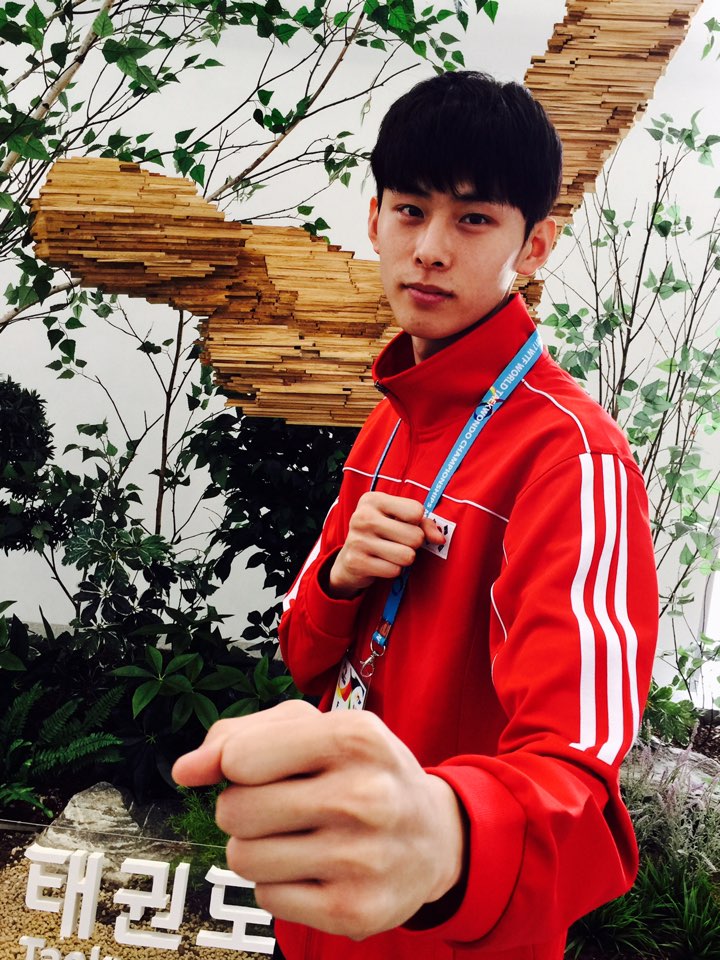 “I did a lot of training for the close fight: A lot of weight training,” he said. “There has to be basic strength for the new rules, not for any special technique, but for general strength and for leg strength - not to get pushed off the mats.”

The training paid off: Kim relentless pressured his opponent backward. Many competitors (and teams) are not yet fully settled about how to leverage the use of the push that the new rules allow, which may herald a new range of techniques and tactics: Do you push and kick? Push and spin? Or push just to make fighting space and clear the clinch? Kim, however, is clear: “I like to push and go for the head kick,” he said.

Even so, as a tall, leggy player, he has reservations about the new nuances of the close-in game. “There are pros and cons,” he said. “I can get more points kicking to the body; the downside is that you get close and push each other, and that negates the game. “

Unsurprisingly, his favorite technique is the round kick to the head - and Kim’s version is very crafty indeed. “That is my specialty!” he said. “I use it a lot: It is short and strong. It comes up straight and then turns in at the last moment.” Using his hands he showed the unusual trajectory the kick takes: It starts out on a low, straight line under the opponent’s guard, then flicks up, unseen, to the head. As it evades peripheral vision, an opponent has to have an ultra-sensitive combat radar to detect it. 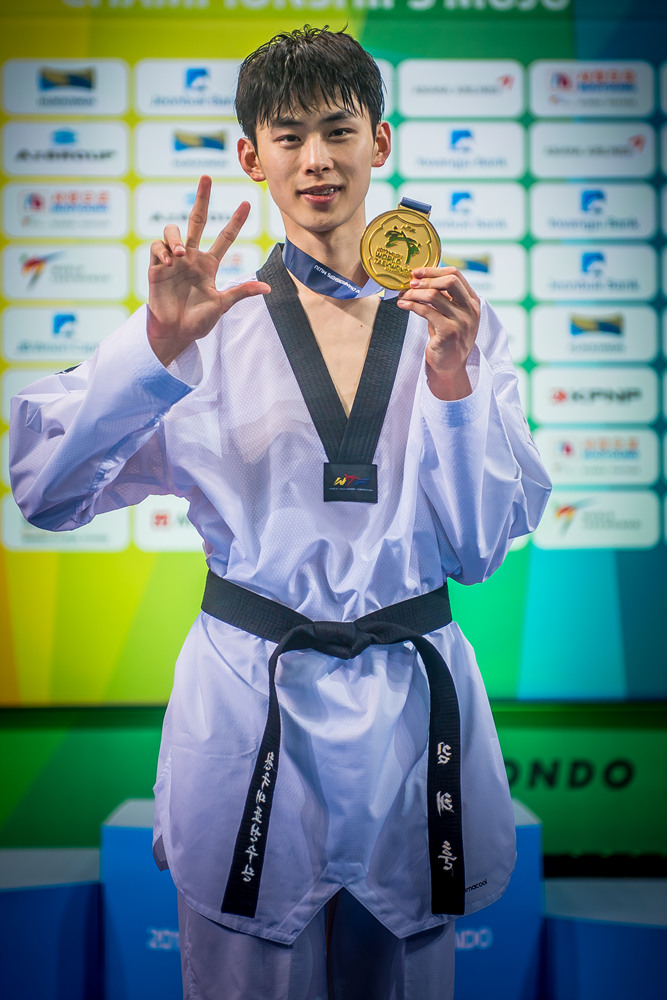 He has no complaints about the PSS, but is not in favor of the possible adoption of a sensor on the trunk PSS to score punches, which some in the sport are arguing for. “It would encourage too much close contact,” he said. “It could ruin taekwondo fights. “
Asked about his favorite competitors he mentioned Team China’s legend Jingyu Wu – “I like her fighting style” – Azerbaijan’s Milad Beigi Harchegani – “He is really good and I think he has a special style of taekwondo” – and Team Russia’s Alexey Denisenko – “He has a multi-faceted fighting style, I like his techniques - that guy has a lot of skill!”

In his free time, Kim plays computer games and hangs out with friends. In the future he plans to continue to compete: “I am still young and I want to show good competitions for the spectators.” But he will not stay in taekwondo forever. “I have no big plans as I am focused on taekwondo,” he said. “But in the future I want to find something I really want to do, I don’t really want to work in the taekwondo field. “

Regardless of what he does in the future, as a three-time world champ as of June 26, 2017 - Tae-hun Kim’s name is deeply engraved upon the sport’s history. The question is what will taekwondo textbook writers of the future dub his bespoke round kick? Perhaps, “the stealth kick?” Or, perhaps, “the Tae-hun chagi?”

Tae-hun Kim at a Glance: