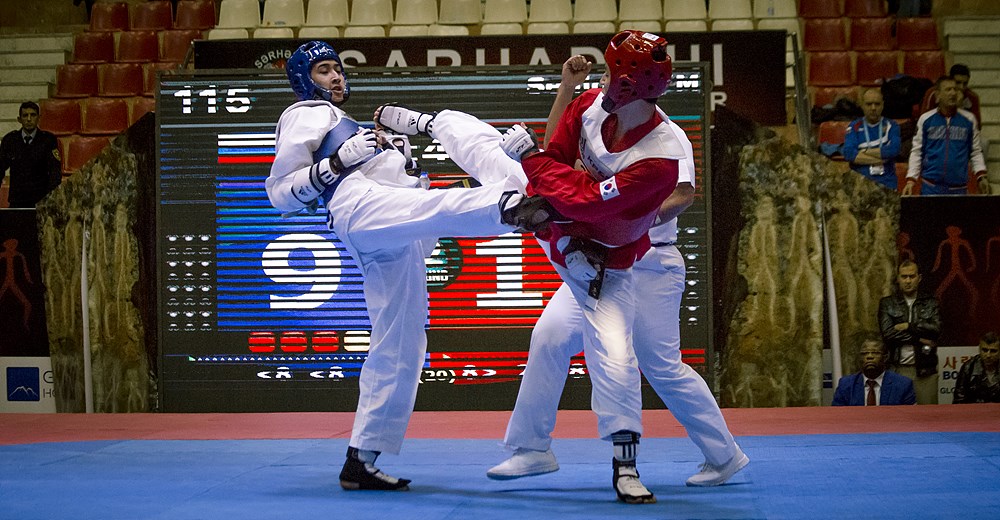 Team competition – which pitches nation against nation in a tag-team format – is, for those familiar only with the individual game, a spectacle to behold. With no time for stand-off tactical play, the action is high-speed, high-altitude and high-octane: Athletes careen across the mats, unleashing flurries of taekwondo’s highest-scoring, most spectacular techniques.

Each team consisted of five athletes, plus one substitute, with a weight cap for the full team. The first round was fought with each athlete, from the lightest to the heaviest, fighting his or her counterpart in the opposing team. The second and third rounds were fought using a substitution system.

By the end of Day 1, which took place in round-robin format with each team fighting every other team, the semi-finalists had been decided.

Although the crowd was smaller than that which had attended the World Taekwondo Grand Prix Final from Dec. 9-10, it was far noisier.

The spectacle on the mats – pre-battle huddles, explosive action and flamboyant victory celebrations – ignited far more excitement than had been the case two days earlier. Chants from competing support contingents reverberated from the walls of the arena.

He added, “This is much better than the individuals!”

Semi-finals and finals take place tomorrow from 1:00PM. Also tomorrow, four teams – Belgium, Korea, Russia and USA - will compete in a mixed-gender format which is being tried out for the first time at the World Team Championships.