BURNABY, Canada (Nov. 20, 2016) – The last four gold medals on the fifth and final day of the 2016 World Taekwondo Junior Championships were won by  Great Britain, Slovenia, Iran and Russia. 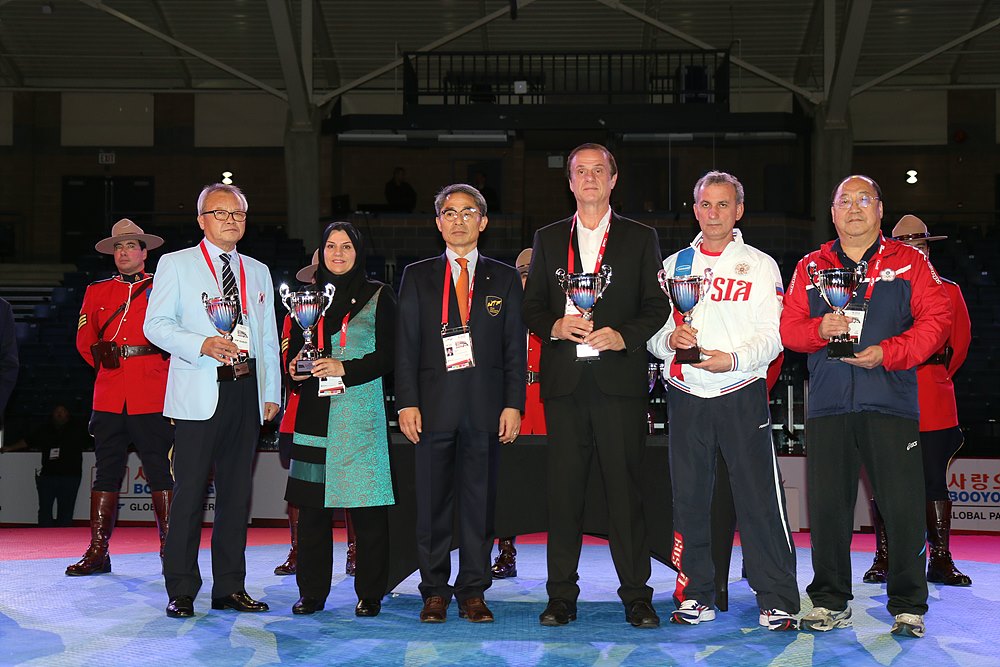 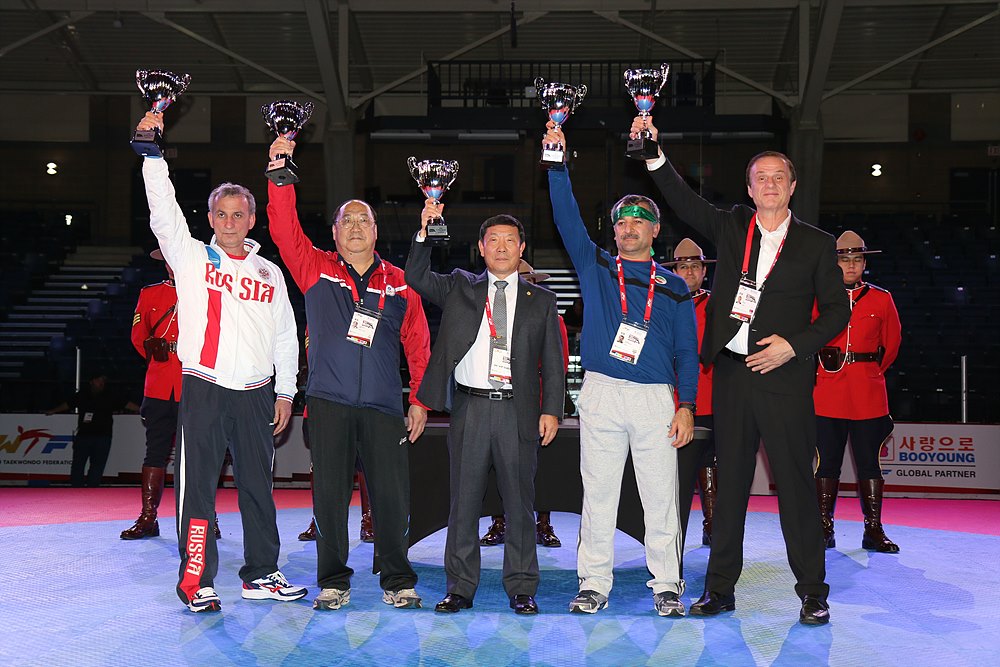 Canada’s Skylar Park (-59kg) was named female MVP; the male MVP award went to Korea’s Chan-Ho Jung (-55kg). The Best Coach award in the female division was won by Fatemeh Safarpour from Iran; in the male division it was won by Jung-ho Kim of Korea. The Best Referee awards were given to Yassin Abdullah ai Naimat from Jordan, Eid Fairouz Mesmari from UAE, Panikos Loizou from Cyprus, Eric Wah from Canada and Guler Gencturkoglu from Turkey. The Good Fighting Spirit Award was won by Brazil, while the Active Participation Award was won by Australia. 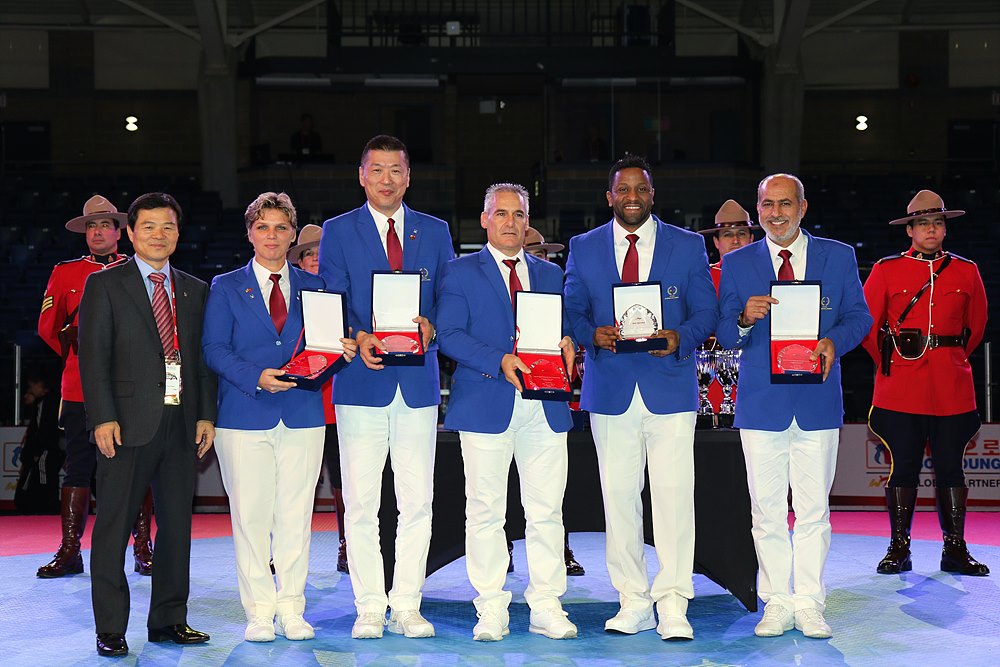 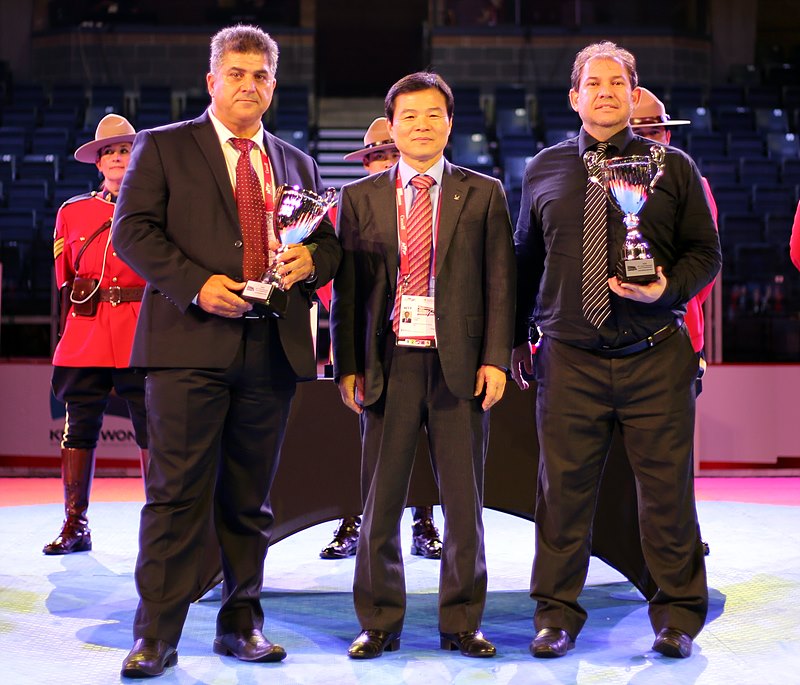 The final match of the female -68kg category saw Polina Khan of Russia face off against Lauren Williams of Great Britain - who had been highly impressive in the semi-finals, winning by point gap. The British girl started off aggressively, forcing her Russian opponent off the field of play and head kicking her on the way down and out, for 3-0. The three points were appealed for kicking a downed opponent; the appeal was upheld, ending with the points being withdrawn. But Williams did not let up as the action restarted, displaying a ferocious fighting style, firing a range of weapons and applying constant forward pressure. The round ended 3-2 to Williams. The Briton continued to dominate in the second, punching Khan to the edge of the mats and axing her on the way down. Again, the points – 6=2 – were appealed Again, the appeal was accepted. Action restarted - and two punches from Williams delivered real “trembling shock” and took her score up to 4-2, then 5-2. The girls clinched and struggled. Yet again, Khan was evicted from the mats. The Russian tried to get back into the game, releasing some dangerous-looking spinning kicks, but Williams took her score higher, up to 6-2. One of Khan’s counterpunches caught Williams mid-kick, raising the Russian’s score to 3-6, before a penalty point gave Williams another point, 7-4 The round ended on that score: Well before the third round began, Williams was up on the mats, ready to rock. The Russian girl looked both tired and intimidated as she stepped up. Again, Williams stormed forward with a blitzkrieg attack, scoring to Khan’s head, then the Russian was penalised for grabbing, taking Williams’ points to 11-4. Constantly attacking, the Briton was stabbing side kicks with savage intent; a side-kick punch attack gave her a 12-4 lead, a punch-round kick attack took the board 13-4. With five seconds left, the Russian coach appealed a head kick: no score. Action restarted and the British crowd counted down the last seconds.  Final result: 13-4. It is rare that the fiercest fight of the finals is in the female category, but such was the case this night. At the center of the mayhem, the referee had to work almost as hard as the fighters. Khan took silver and did well to stand up to the force of nature that was Williams - definitely a face to watch. 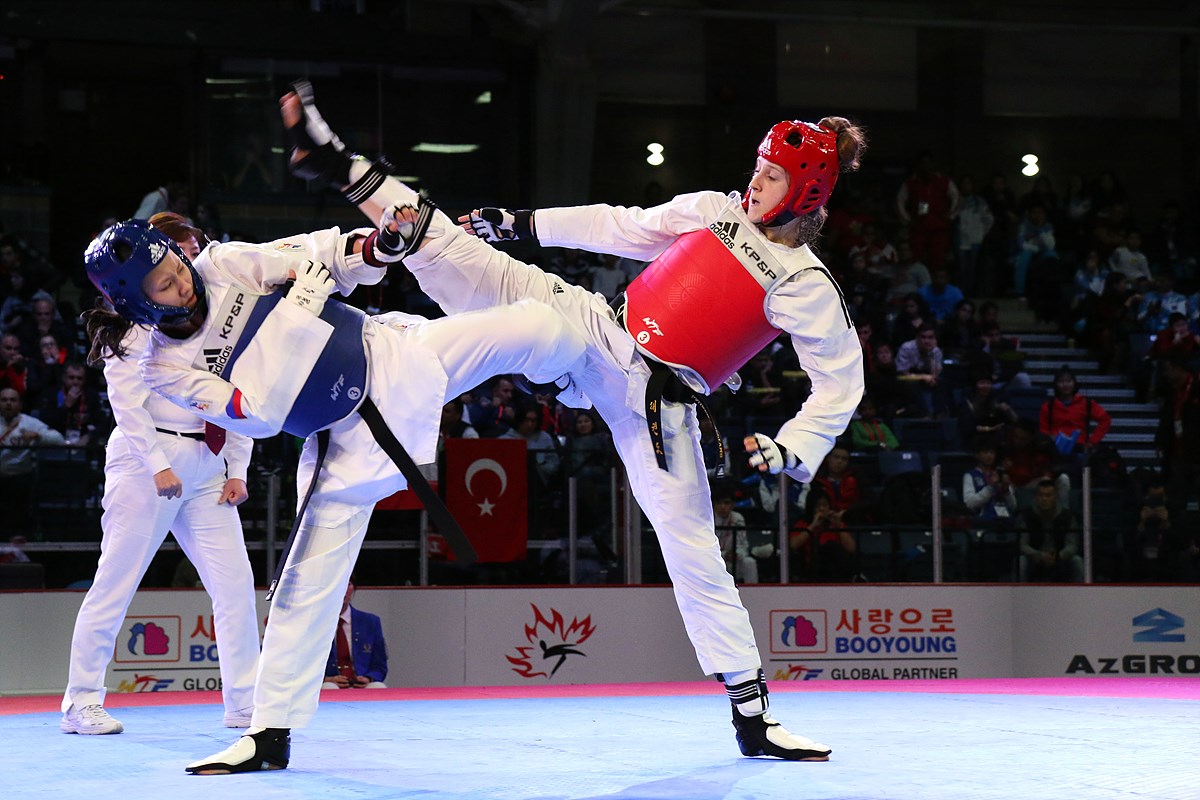 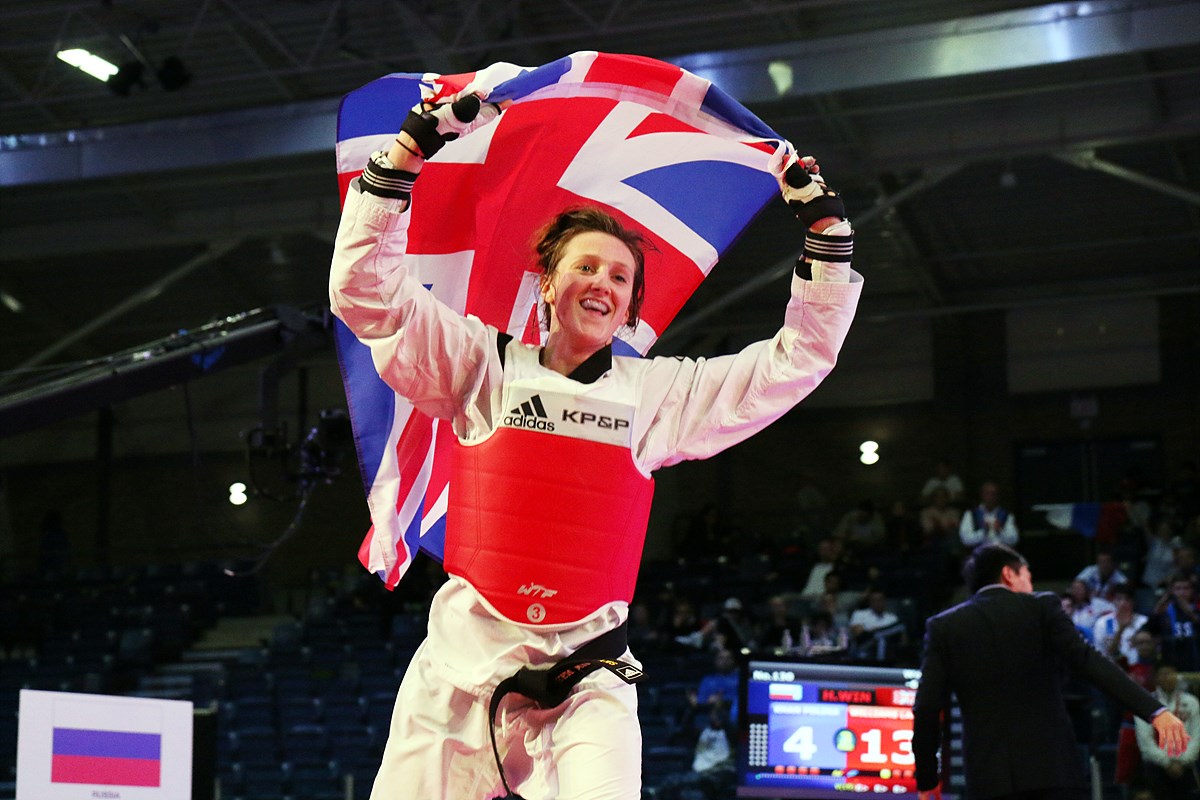 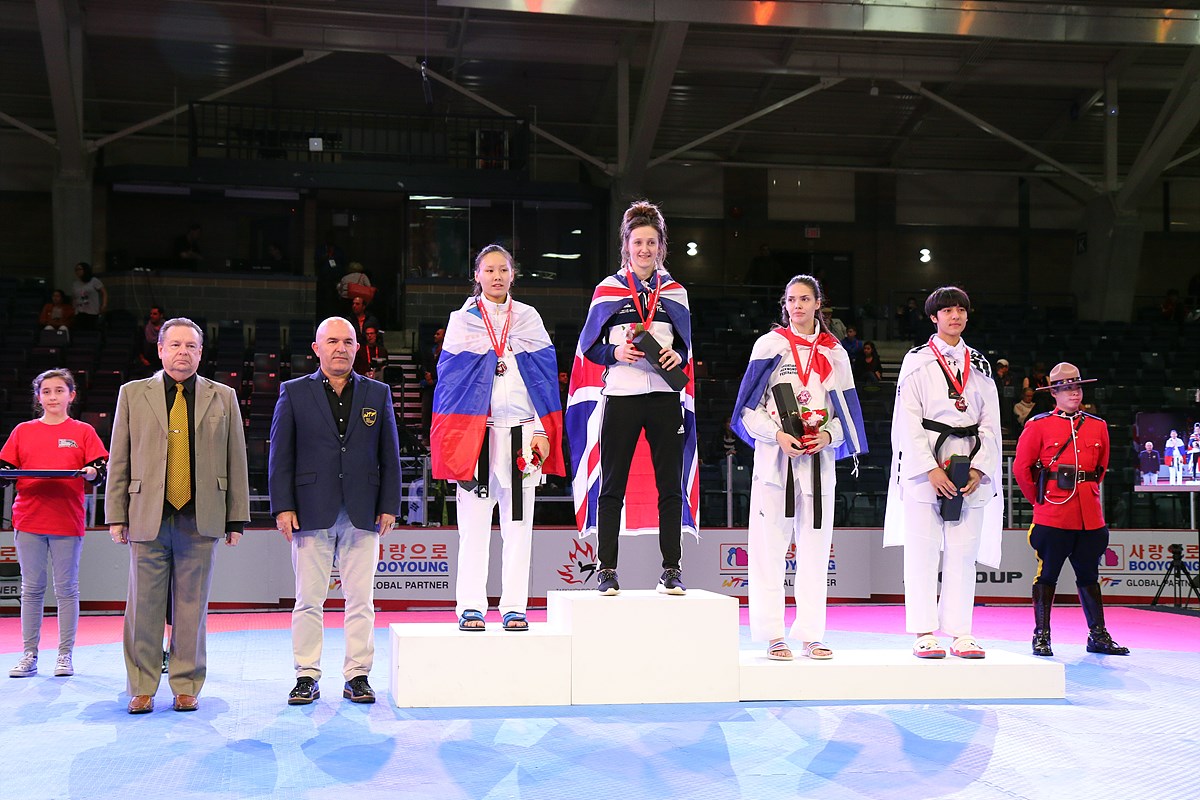 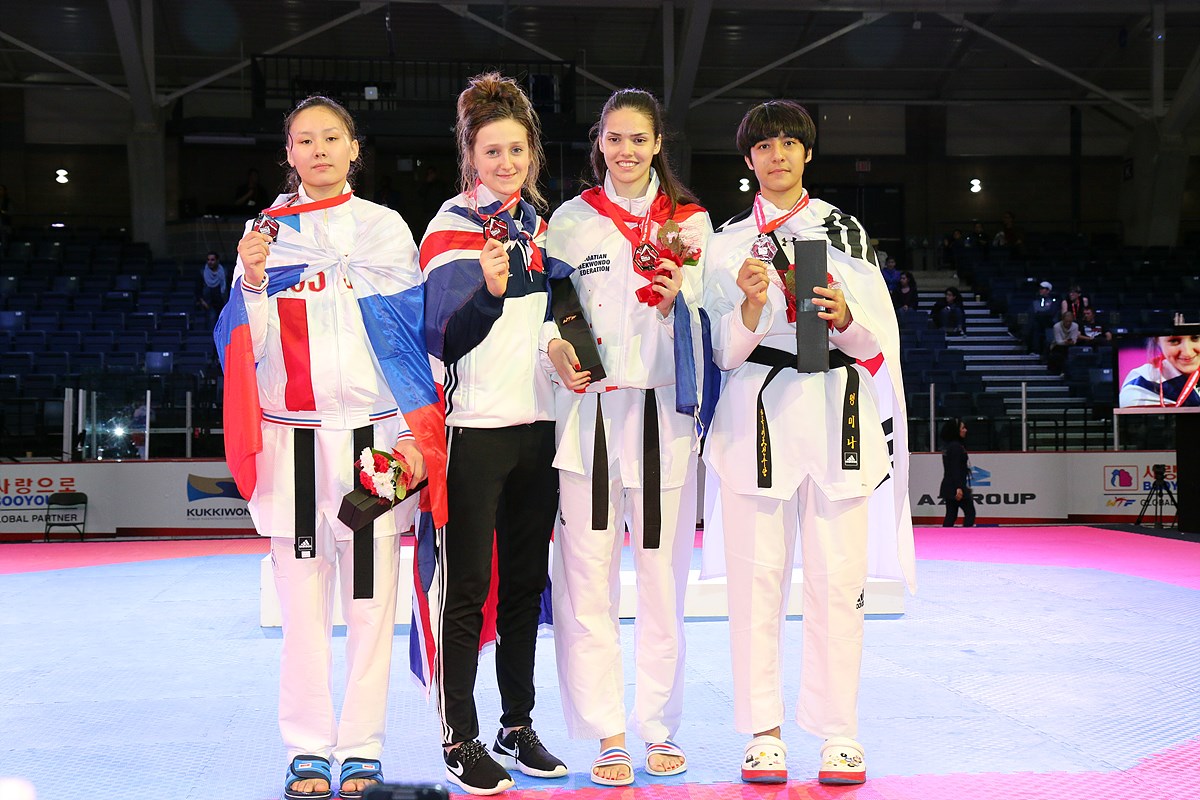 In the male -78kg kg category, Hasan Can Lazoglu of Turkey took to the floor against Partik Divkovic of Slovenia – two athletes whose flamboyant fighting styles had earlier delighted the crowd. However, the first round started off with some desultory sparring as both lads strove to capture optimal position on the mats. Divkokic struck first with a one- point body kick, and the two continued their distance sparring, but with little action. Round 1 concluded, 1-0, to the Slovenian. The second started faster, with the Turk trying to even the score and Divkovic employing some nifty footwork to stay out of trouble. Still, the Turk struck, taking his score to 2-1, then 3-1 then 3-2 as the two exchanged fast, light techniques at distance. The round ended 3-2 to Lazoglu.

The final round stared faster, with the Slovenian evening the score to 3-3: the Turk landed a cut kick, then the Slovenian shot back with a punch. Then there was a lull, with the referee calling again and again for them to close and fight. They did - and the score rose to 4-4. The Slovenian managed a kick on the retreat to go up 5-4. Things heated up as the board rose to 5-5, then Divkovic fired a picture-perfect punch – full extension, full retraction – to go 6-5 up. As the last seconds counted down the two fighters showed what they were capable of, firing round kicks, ax kicks, crescent kicks and punches on the edge of the mats. When the bell went, the Divkovic had taken gold, 6-5. He hurled his headguard to the mats in joy, leaving Lazoglu with the silver after a closely contested match. 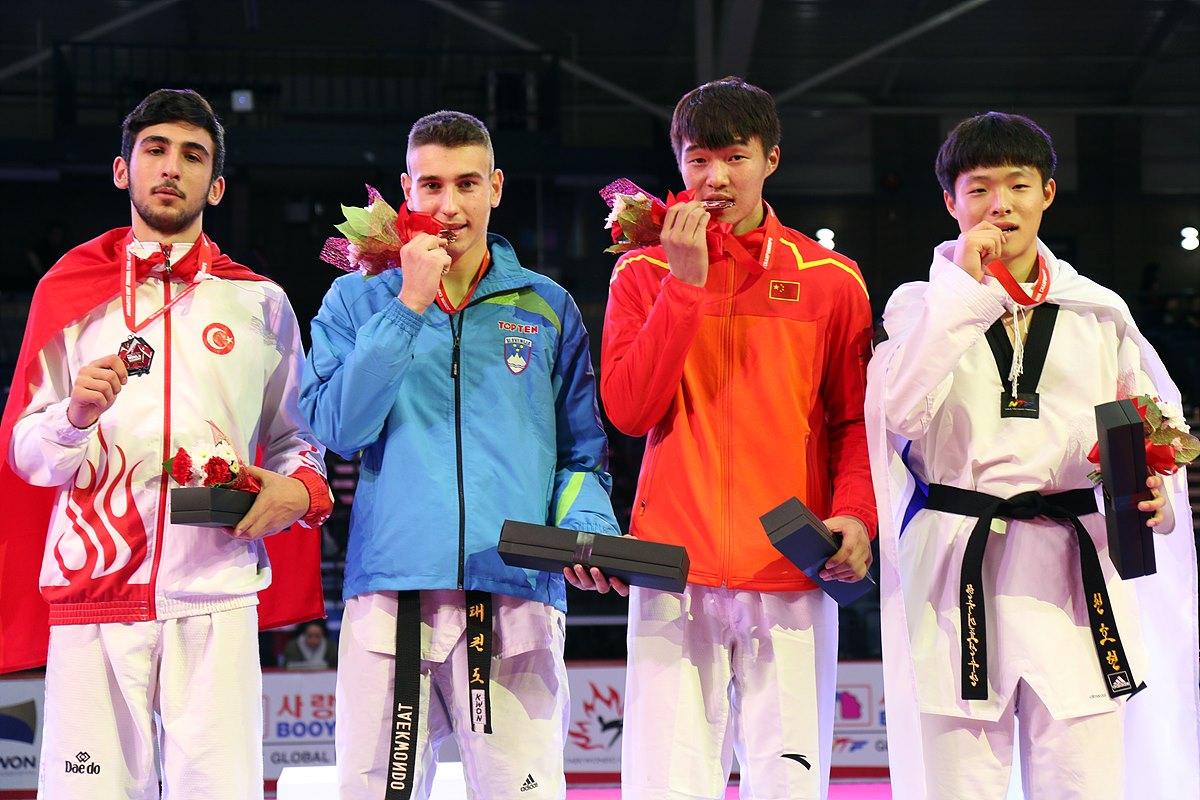 In the female +68kg category, Zahra Pouresmaeil of Iran took on Yun Ci Pan of Chinese Taipei. The former was giving away half a head in height and looked tired - but in taekwondo, you can never count out Iran. Pan struck first with a round kick to the body; the Iranian swiftly equalized from the edge of the mats, then went 2-1, then 3-1 up, even thought it was the Taiwanese girl was who was moving forward – nice tactical play from the back foot by the Iranian girl. Round 1 ended 3-1 to Pouresmaeil.

In the second, the taller Pan was making every effort to score, but Pouresmaeil maintained a tight defense, making good use of parries and blocks, then came to life, with an apparent crescent kick to the face which did not score. A video replay was called for and rejected, leaving the board at 3-1. Both girls crashed to the mats as the action grew torrid, and Pouresmaeil looked like she had injured her hip. After a quick medial inspection, she was back on her feet. The rounded with the Iranian girl up, 3-2.

As the third got underway, both girls were firing more techniques, but not scoring; Pouresmaeil gained another point, 4-2 as Pan hit the deck. Finally, the girl from Chinese Taipei scored with a punch, taking the board to 3-4, and in the final 30 seconds, clawed back another point to make it 4-4. With just 10 seconds remaining, Pouresmaeil scored again, 5-4. Right at the end it looked like Pan had landed an equalizing punch, but the clock had timed out. It was a highly professional performance for the gold by Poursemaeil, who had fought economically and done only what was necessary to stay ahead of her opponent throughout the fight.

Silver went to Pan, and bronzes were shared by Do-hee Yoon of Korea and Rebecca McGowan of Great Britain 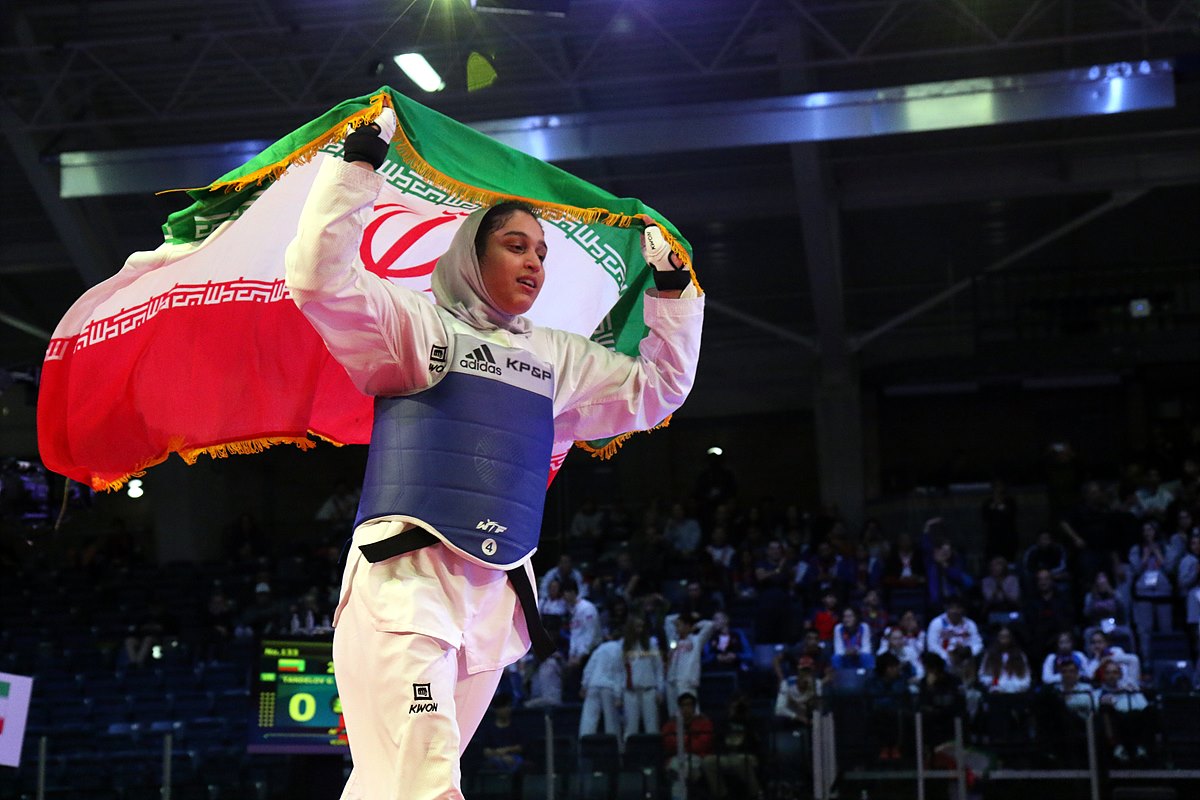 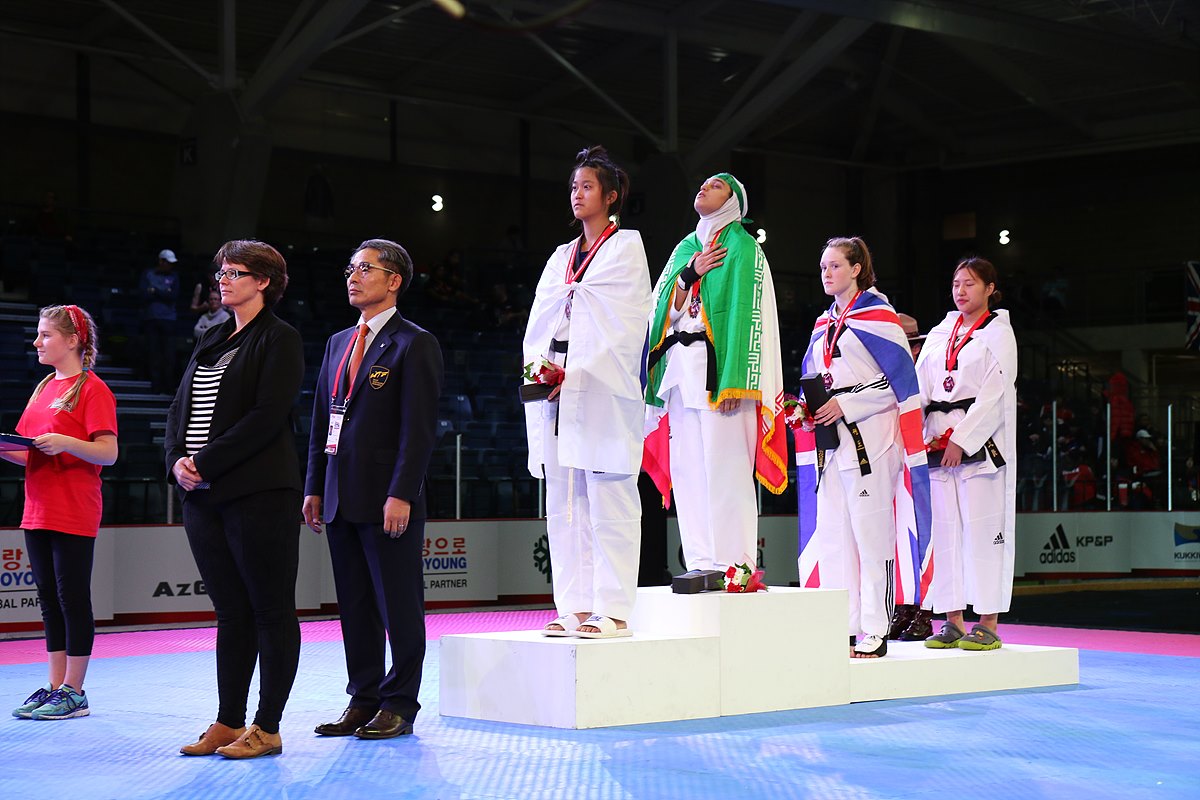 In the male +78kg category, Russia’s Georgi Tandelov , the biggest player in the semi-finals, did battle with Aleksander Keselj of Germany. From the beginning the Russian was fighting forward, landing heavy shots to both body and heady. The German fought back gamely, but his light-footed, flicky style of taekwondo was unable to parry the Russian’s powerhouse attack. Still, the Russian was no bulldozer: Defying his size, he landed a nimble head kick from the clinch to go 10-1 before a jumping ax kick by the German took the board to 10-4. A highly entertaining round,

As the second got underway, both boys looked ready to get it on. The Russian sneaked a kick over the German’s shoulder to go 13-4; the German returned fire to go 5-13, then 6-13. But just as it seemed Keselj was back in the game, a crescent kick rattled his headgear and the score was 16-6 - then Tandelov forced the German out of the area and tried to drop another ax, but taking the score to 17-6. After a break in the action, Tandelov attacked with a superb sliding ax kick that he planted squarely on the German’s face for 20-6. Tandelov raised his hand in victory, gesturing to his supporters - and that was it: The match ended on point difference. A convincing gold medal victory for the big Russian lad.

Keselj took silver, while bronzes were awarded to Andrei Garbar of Ukraine and Leandro Souza of Brazil.

The closing ceremony featured a series of animated photographs from the previous five days and speeches by dignitaries, then the teams swarmed onto the field of play -mingling, exchanging souvenirs and taking photographs with one another as rock music blasted out from the speakers.

And that ended the 2016 World Juniors. With 846 competitors and 458 officials registered, representing 102 countries, Burnaby 2016 was the biggest tournament in the history of the event.