BURNABY, Canada (Nov. 17, 2016) – Korea’s taekwondo talent pipeline is gushing: The nation seized three out of the four gold medals on offer on Day 2 of the 2016 World Taekwondo Junior Championships, leaving one to be won by Thailand.

On the second day of the five-day competition, medals were available in the female -46kg, female -49kg, male -51kg and male -55kg categories. 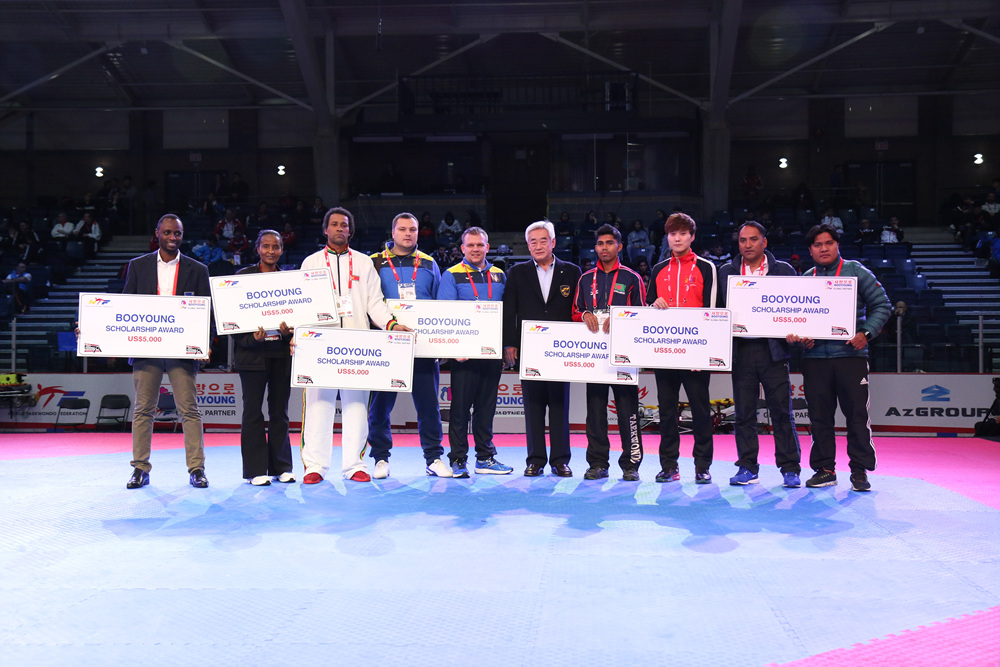 Just prior to the semi-finals, Booyoung Scholarships were awarded to seven nations.

Bangladesh, Botswana, Guadeloupe, Mongolia, Nepal, Rwanda and Ukraine each received US$5,000 from Booyoung, the WTF’s official global partner, with checks being presented to national representatives by WTF President Chungwon Choue. “I am tremendously grateful to our global partner, Booyoung, for so generously offering these grants,” Choue said. “These funds will be invested in upgrading taekwondo in the recipient nations.”

The final of the female -46kg category saw Rim Bayaa of Sweden going into battle against Napaporn Charanawat of Thailand. Both girls went at it from the opening bell, with the Thai dominating center court and the Swede attempting to score from the perimeter. Both athletes were displaying a range of techniques – ax kicks, crescent kicks, rear-leg round kicks – but it was the Thai who drew first blood with an ax kick to the head that dropped the Swede to her knees for a 3-0 lead. Charanawat’s coach requested a video replay for a round kick to the head; it was denied. After an exchange of ax kicks in the clinch, the round ended 3-1 to Charanawat. As Round 2 got underway. Charanawat landed another head kick, going up 7-1. Action continued with the Thai trying to drop the ax and the Swede responding with spinning back kicks; Charanawat who extended her lead to 10-1. More action followed with an exchange of punches, then the Swede landed to the head, bringing the board to 4-10. In the third, Bayaa went into the attack, fighting forward strongly. The Thai’s stamina and flexibility were impressive as she raised her ax kick toward the ceiling again and again; the board when to 5-11. As the round counted down, Charanawat finally seemed to be tiring, relying more on counter punches more than her high-energy kicks. With 30 seconds left and the Swede 5-11 down, Bayaa had her work cut out and launched into all-out attack. Charanawat gamely fought back, rather than retreating tactically and waiting for the clock to end it. In the dying seconds, both fighters tumbled to the floor. After an exhausting match, Charanwat won 7-11, leaving Bayaa with a well deserved silver.

Bronzes went to Nuray Muratkyzy of Kazakstan and Abishag Semberg of Israel. 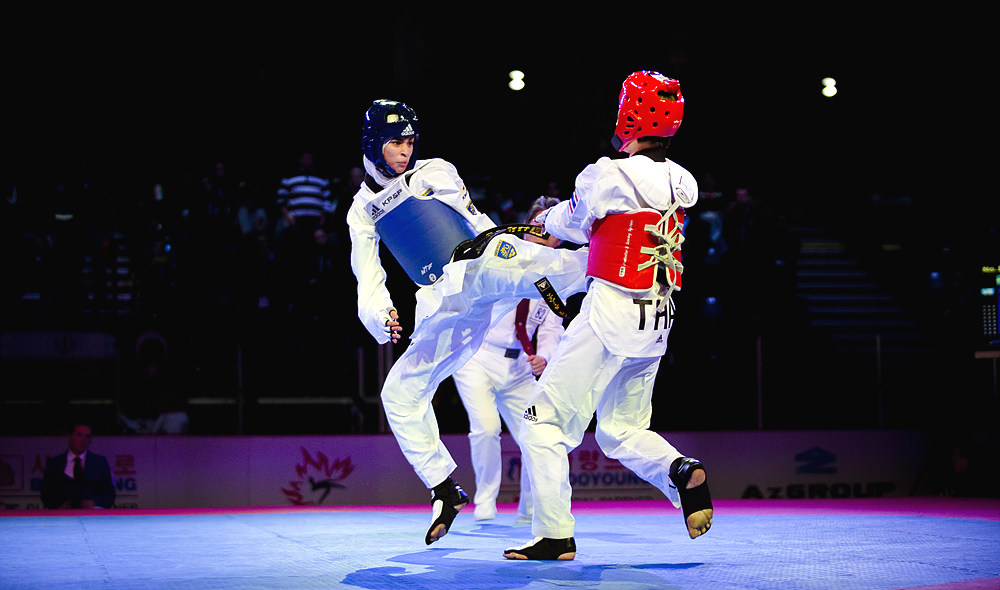 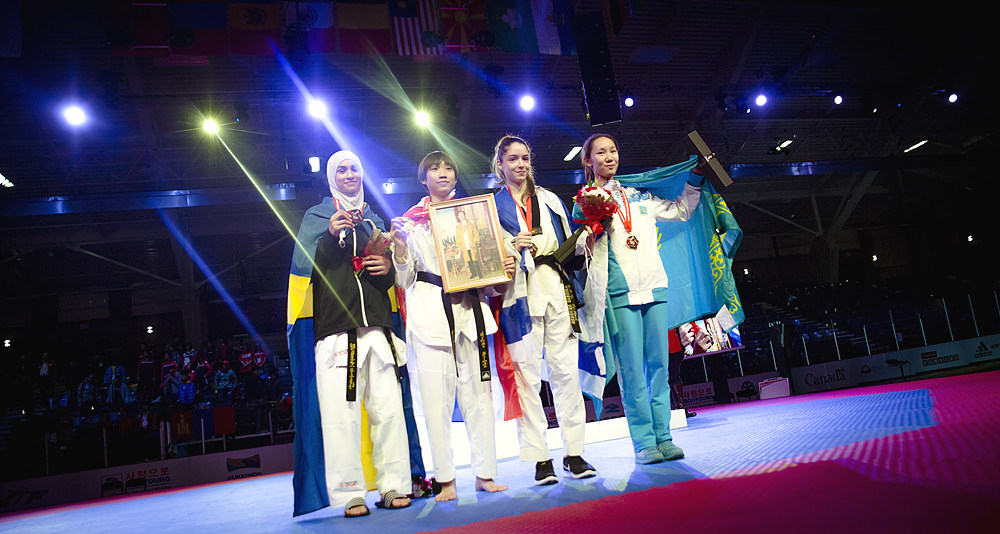 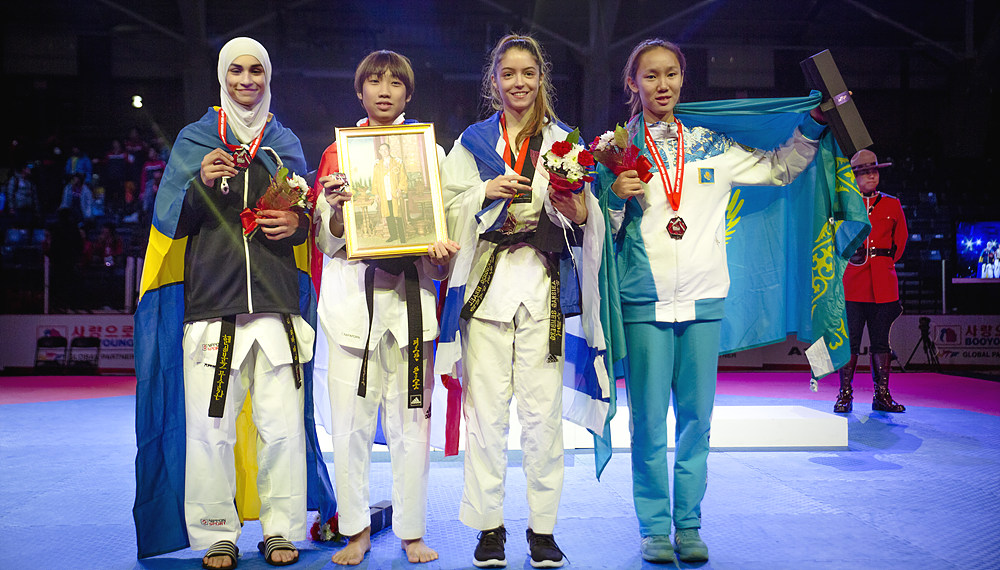 The finals of the male -51kg category promised a war. Ebrahim Safari Soumeeh of Iran wields his front leg kick in both a brilliant defensive posture and, in offense, with a wicked cut kick and round kick to the head. Jun Jang of Korea is also a headhunter who deploys a deceptive, axing crescent kick to the head mobilized by lively footwork and underwritten by excellent ring control. Action started from the bell as both lads extended their front legs, trying to dominate the ring and intimidate the opponent. But each was canceling out the other’s techniques out, fighting from side-on stances and keeping their knees at the high chamber. What had promised to be a firefight degenerated into a tactical bout with the referee constantly calling on the two to fight. The round ended 0-0. Round 2 opened with both trying high kicks and both failing to land; the two were mirror images of each other. Again, the referee had to call one, twice, three times for the two to engage – but in vain. The round ended scoreless.  In the third, Jang tried to close the gap with a jumping kick - to no effect. Finally the Iranian landed a punch, taking the board to 1-0. Jang tried a serial ax kick-spinning back kick attack - no luck With 20 seconds remaining, the Korean was forcing the Iranian to back pedal. In a messy clinch, the board went up to 1-1. The Iranian coach appealed; it was refused. Then, in a show of professionalism in the last seconds, Jang landed an arcing ax kick to the head that ended it 4-1 for the gold, leaving Safari Soumeeh with silver. It had been an exciting end to an otherwise disappointing match.

Bronzes were shared by Sheng-lun Huang of Chinese Taipei and Sergei Kirsanov of Russia. 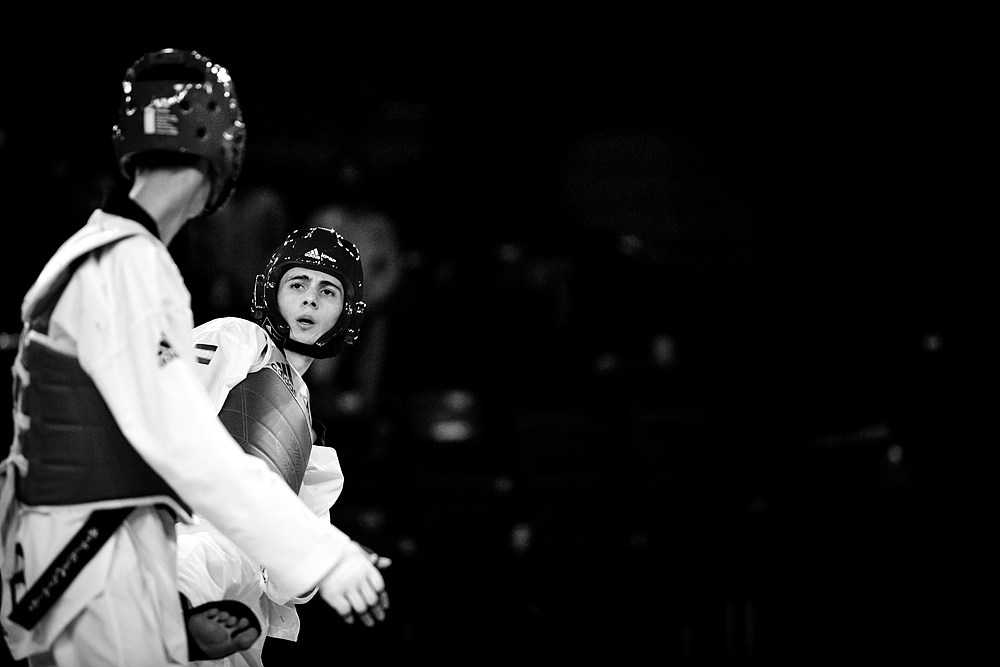 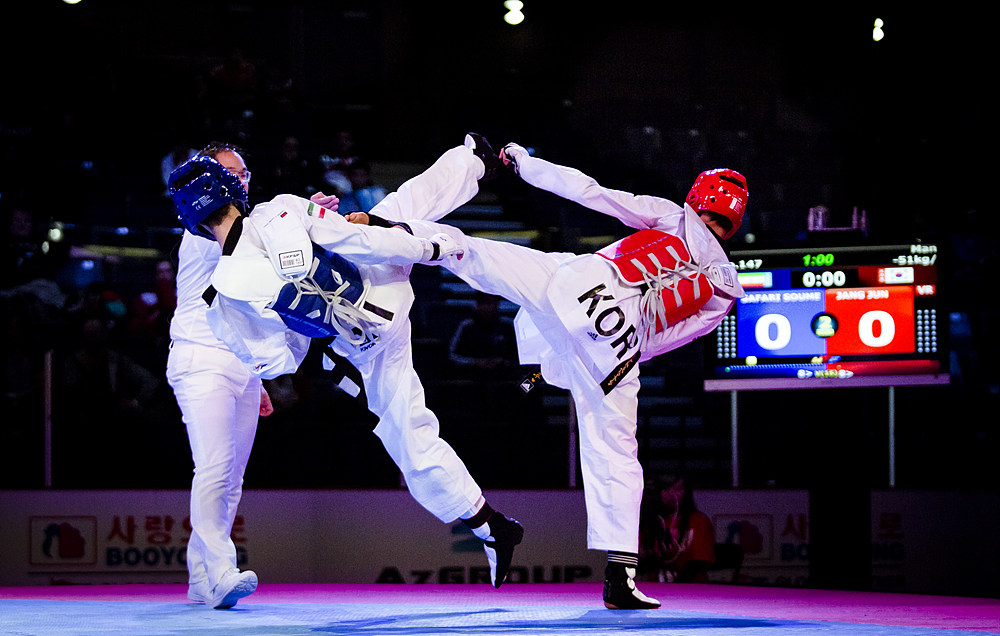 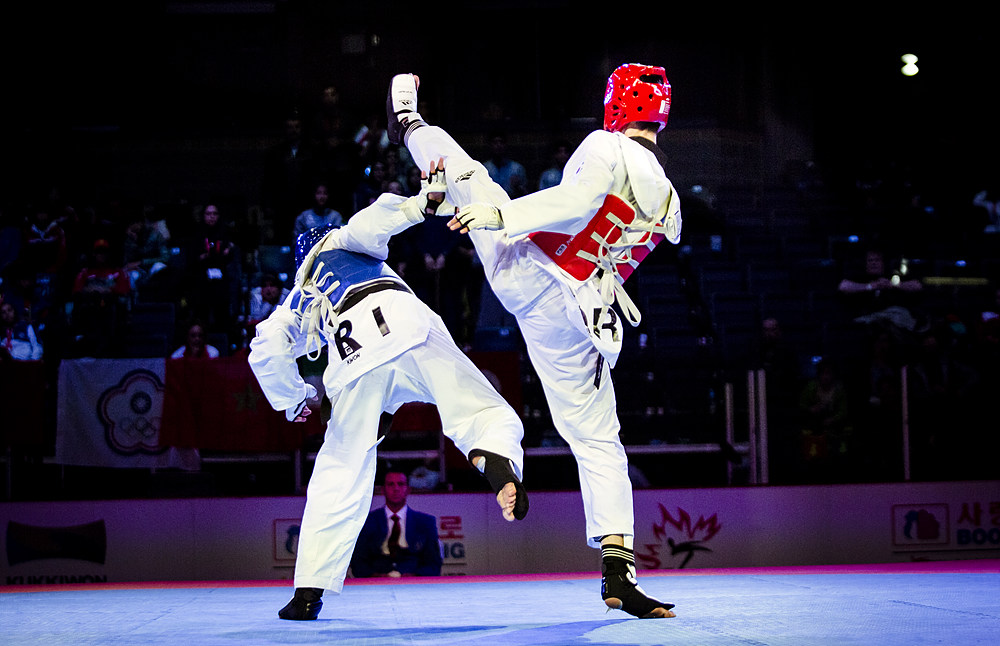 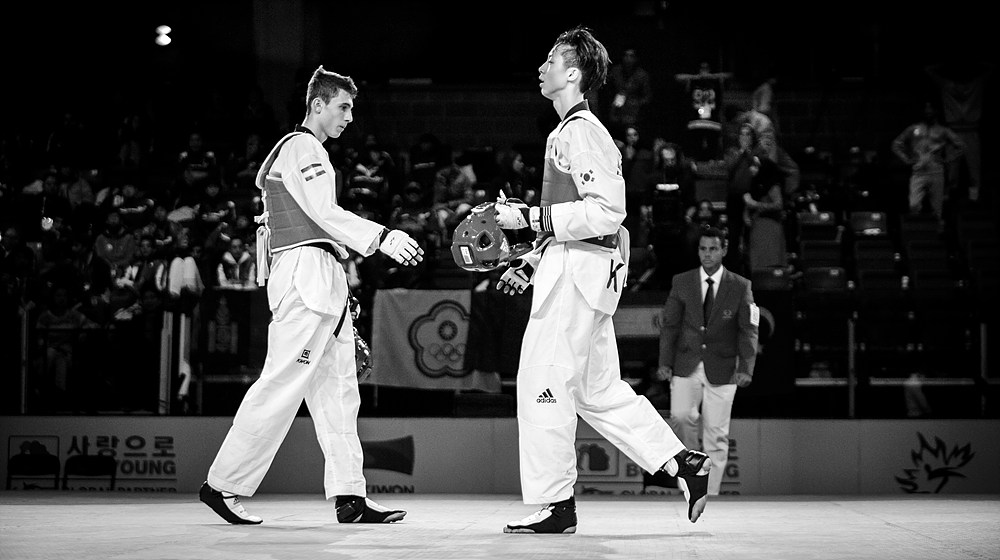 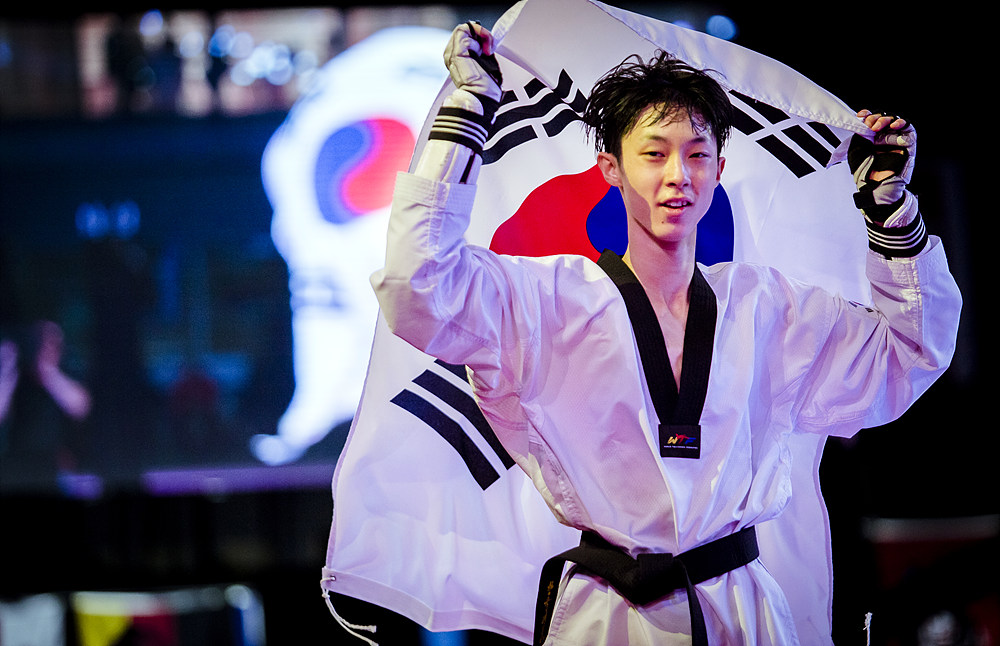 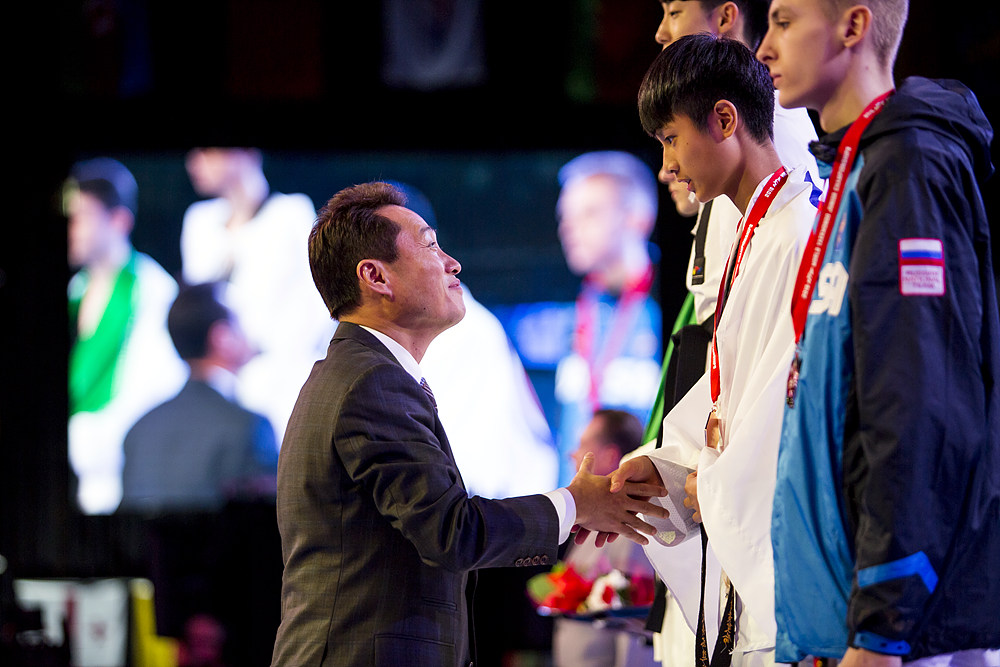 In the female -49kg Yu-jin Kim of Korea took on Chia Yin Sung of Chinese Taipei. From the start it looked like a mismatch, with Kim towering over Sung by more than a head. Action began with Kim trying to drop the ax, varying her attack with a stabbing side kick. The Taiwanese looked intimidated and backpedaled laterally, trying to score on the counter. The round ended with the board empty. In the second, Sung shifted up a gear and Kim slipped, but then continued to move forward with her side kick-ax kick attack, while Sung returned fire with cut kicks and punches. Neither connected. Finally, Kim landed her ax, taking the score up to 3-0. As the final round got underway, Sung started taking risks, moving in on her much taller opponent. She landed a back kick to Kim’s body, but it did not register on the PSS. Again, she attacked, impacting with a jump round kick to Kim’s body that thwacked across the arena. Again, it did not register on the electronics. In the last 30 seconds, she forced Kim off the mats, scoring a point on penalties. Then she fell herself, taking the board to 4-1. With just a few seconds remaining, Kim landed another head kick, taking the fight 7-2 and leaving Sung with silver.

Bronzes were won by Gabriela Brishkarova of Slovakia and Daniela Paola Souza of Mexico. 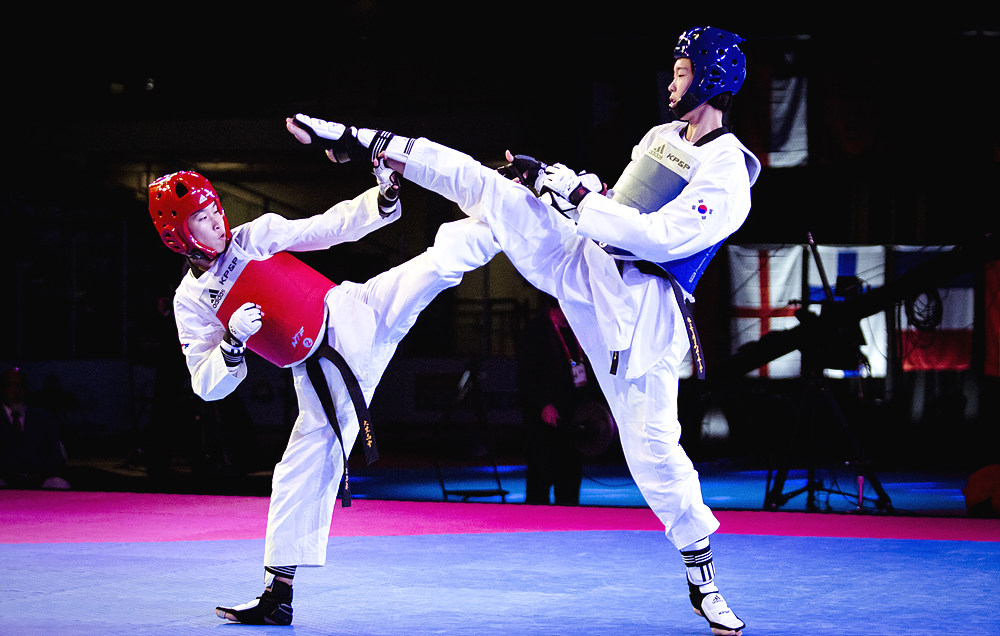 The male -55kg category final promised stratospheric scoring. Gashim Magomedov of Azerbaijan is a showy, versatile fighter with a spectacular arsenal - ax kicks, jump kicks, spin kicks – and very lively footwork, who had won his first semi-final on point gap. He was taking on Chan-ho Jung of Korea, another high-scoring head hunter with wickedly fast kicks who had also won his semi-final match by point difference.

From the start Magomedov looked stylish, dancing around the ring, motioning high and low and trying to fake out his opponent - but Jung stayed cool in the face of these unorthodox tactics and scored first with a head kick to go 3-0 up. Both fighters shifted feet swiftly, trying to open the opponent up to attack; the Korean was throwing more kicks, while the Azerbaijani was more mobile. In the last second of the round, Jung’s coach appealed for a head shot. It was denied. In Round 2, Jung’s speed came fully online as he stabbed out kicks like cobra strikes, landing another head shot to go 6-0 up.The action continued in the same vein as both boys switched legs, faked each other, and sought the advantage. The round ended 6-0 to Jung. At the start of the third, Jung struck with a hook kick to Magomedov’s jaw, going nine points up. Now Magomedov had to attack with real conviction. As the match moved into impact range, both fighters were unleashing ax, spinning and jumping kicks. Both fell in a tussle. Battle was halted while Magomedov replaced his mouth guard. With 50 seconds left, the Azerbaijani switched to jump spinning round kicks and spinning back kicks. Jung stayed game, firing back with spinning kicks off his own. With Jung surging ahead on points and the last seconds counting down, Magomedov flew across the area with a jump spinning round kick-spinning heel kick combination which Jung narrowly evaded. The fight ended 12- 0 to Jung, with Magomedov taking silver. It had been by far the most exciting final of the day, a live action movie of high kicking, high-octane taekwondo

Ali Baseri of Iran and Houssam El Amrani of Morocco went home with the bronzes. 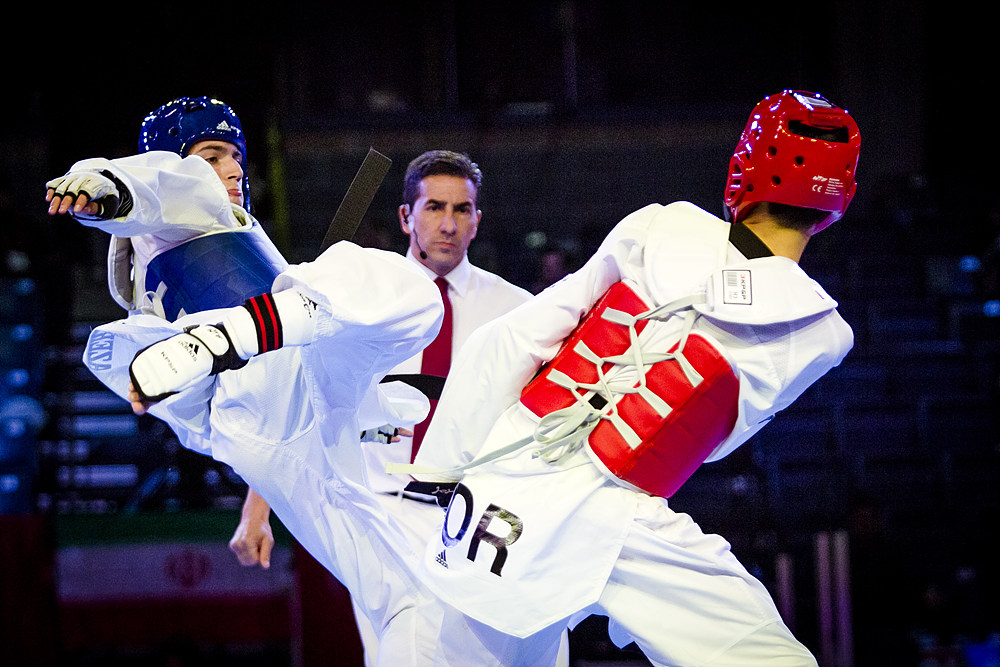