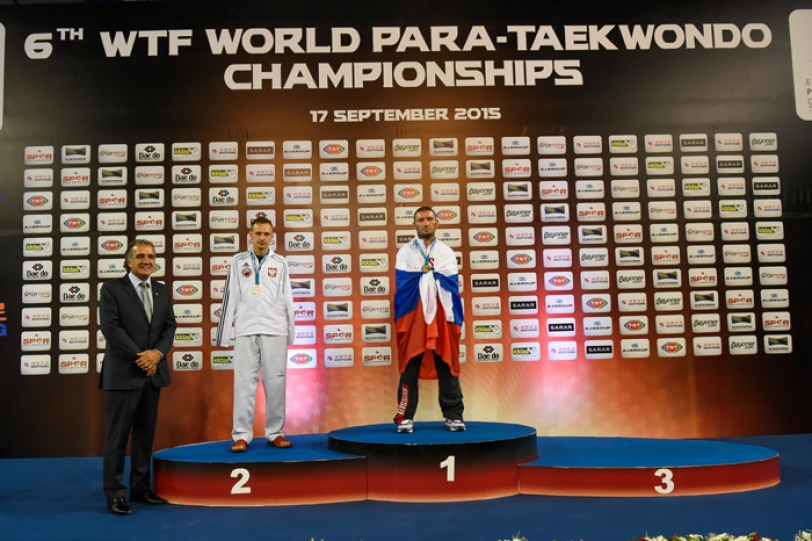 SAMSUN, Turkey (September 17, 2015) - Imagine this. Imagine you, an eight-year old boy, are walking to school. You decide, for fun, to open an electricity power box. You are immediately floored with a massive electric shock – but get up and continue on your way to school. Then you collapse. Discovered by passers-by, you are rushed to hospital.

Imagine, if you can, that both your arms then become infected from the injuries. The doctors are forced to amputate them - bit by bloody bit - until you have no arms left.

Imagine that. Or, if you prefer, ask Spartak Gazzaev, for this was exactly his experience. But if you think that devastating experience caused the Russian lifelong trauma or caused him to give up on life – well, think again.

“I got used to it, I kept going: Why feel sorry for yourself?” he asked. “Now I have a wife with zero disability and four kids - my eldest is 19, my youngest is four - and I feed the whole family, including uncles and cousins. Nobody works! Only me.”

Gazzaev is a three-time world para-taekwondo champion – a remarkable feat for a 42-year-old. Outside the dojang, he lives life with the same relentless energy he displays on the mats. his lack of upper limbs does not stop him from driving a car, riding a bike, swimming mountain rivers (“they are fast and cold”) or skiing. He also plants his own vegetables and changes diapers. In the future, he plans to learn to fly helicopters.

In short, Gazzaev is an impressive man.  He minces few words about those who lack the willpower to achieve what he has achieved. “What is most important is the head,” he said. “A lot of people have both arms but cannot help themselves.” In common with many of his countrymen, he has a philosophical side. “If you want to live, you need to move, to keep going,” he mused. “I am just a simple human. Everybody has their own life and they decide themselves for what kind of life it will be.”

Gazzaev has clearly decided to live life to the max. His uncompromising attitude is recognized by his teammates, who have dubbed him “The Russian Grizzly.” “I am from a republic in the mountains, and I rarely smile,” the North Ossetian says (with a smile). “The Russian bear can be very friendly – or he can kill you!”

The region he hails from is known for breeding exceptionally hard, determined men: It is famed among Russians as the only part of Eurasia which Genghis Khan failed to conquer. Overrun, the ancestors of today’s North Ossetians pulled back into their mountain fastness and fought a guerilla war that even the fearsome Mongolian warriors could not win.

Gazzaev’s own combative training commenced in 1990, when he took up karate.  After 20 years, he switched styles to taekwondo as he predicted - correctly, as it turned out - that the sport was poised to enter the Paralympic arena. He now holds a first dan black belt and has five years of experience.

So far, no competitor has stood in his way. He seized his third world championship gold medal in Samsun where the final match posed few challenges. “It was easy - one breath!’ he said. “I won by 12-point gap.” His favored technique is the 45-degree turning kick to the torso: “When I kick, the body collapses,” he said.

A salaried athlete, employed by the Russian government, he is rewarded with bonuses for wins. He also finds the time to run a multi-purpose shop in his home village in Northern Ossetia and plans to open several more.

So what was the driving force that motivated the armless eight-year-old? “If God loves you - if you survive, if you do not die - you must ask ‘Why?’” he mused. “Maybe it is because you need to be here, maybe you have some special mission which you must finish before you go. My goal is to grow my kids, to do taekwondo, to show the world that, even if you have no hands, you can still do things.”

Now, another “special mission” looms on Gazzaev’s horizon. It is the same one that has been consuming countless para-taekwondo fighters across the world since early this year: To go to Tokyo in 2020. “It is the dream of my life - and not only mine,” he said. “Everybody dreams about the Olympics.”

But won’t he be too old – 47! – in 2020 to have a realistic chance of medaling in Tokyo? He scoffed. “It’s better to ask the youngsters. When they reach my age, you can compare!”

And Tokyo - which marks taekwondo’s entry onto the Paralympic program - has added significance. “At the beginning, only one person can be the first Olympic champ in history,” he said. “So my name will go down in history.”

He has no intention of stopping at Tokyo, either: He aims to be competing at the 2024 Paralympics at the grand old age of 51. Surely, that would be a miracle?

“I will keep competing and making miracles until I die, so that everyone can watch me and feel that everything is possible,” he said. “This is my way of life.”