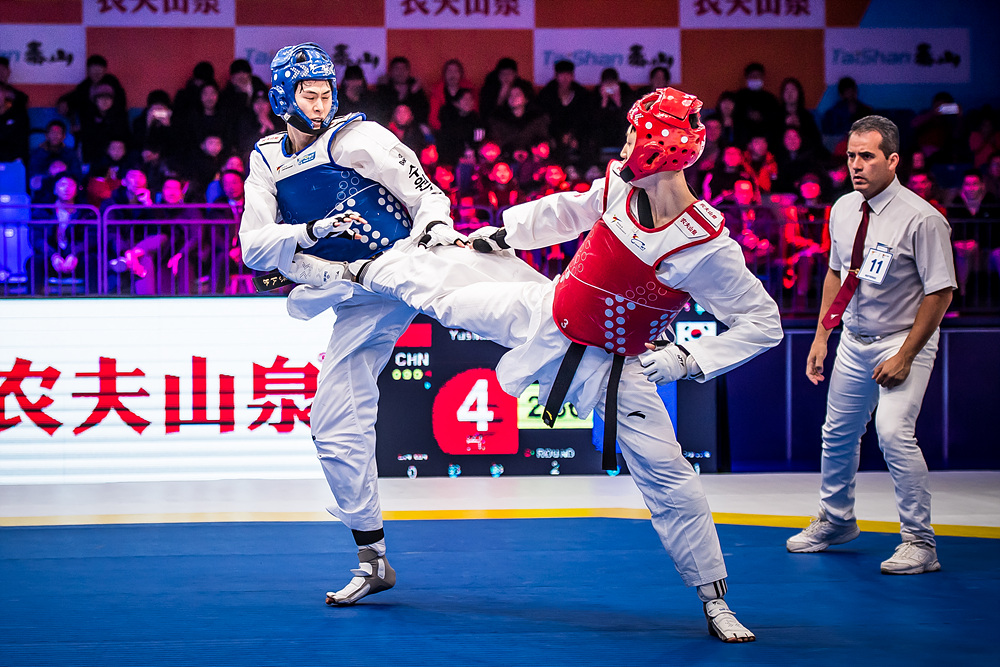 WUXI, CHINA (Dec. 15, 2018) – The fourth day of the World Taekwondo Grand Slam Champions series once against showcased the very best of taekwondo as the sport’s brightest stars fought it out for a place in the finals.

The men’s -58kg category saw number one seed Tae-hun Kim face Yushuai Liang of China. Despite being the favourite, Kim was not able to defeat Liang, who, spurred on by the home crowd won 2-0.  The second semi-final saw number two and three seeds, Jun Jang of Korea and Armin Hadipour Seighalani of Iran match up against each other. Jang proved too strong and won the match 2-0 to set up a final against Liang.

The first semi-final of the men’s -68kg category saw pre-tournament favourite Dae-Hoon Lee of Korea face number five seed Bradly Sinden of Great Britain. Sinden, a young, up-and-coming fighter pulled out one of his performances of the season to secure a shock win, 2-0, and go through to the final. The second semi-final brought together Javier Perez Polo of Spain and number two seed Shuai Zhao of China. Once again it seemed that Chinese athletes were really able to use the home crowd advantage and Zhao won the fight 2-0 to set up a scintillating final against Sinden.

Number one seed Maksim Khramtcov of Russia proved too strong for Linglong Chen of China in the first of the men’s -80kg semi-finals as he secured a 2-0 victory to book his place in the final. Chen had a much smoother quarter-final, as he beat fellow Chinese star Ke Ren 2-0. The second semi-final was fought between number three seed Hwan Namgoong of Korea and number seven seed Milad Beigi Harchegani of Azerbaijan. Namgoong ultimately proved to strong and won the closely fought match 1:0.

In the men’s +80kg category, Kyo-don In was matched up against of Hongyi Sun of China in the first of the semi-finals. On this occasion the home crowd could not get their athlete over the line and In won a very tight and tense match, 1-0. Following yesterday’s shock victory for Sajjad Mardani of Iran, he faced Zhaoxiang Song of China in the second semi-final. Mardani’s good form continued as he won the match 2-0.

Ninth seed Min-Ah Ha from Korea faced Xueqin Tan of China in the first women’s semi-final. Ha eased past her opponent to win the match 2-0. In the second semi-final it was a matchup between number three seed Bora Kang and number two seed Panipak Wongpattanakit of Thailand.  It was a close fought match but Wongpattanakit just edged it to win 2-1.

In the women’s -57kg, Marija Stetic’s good run came to an end as she was narrowly beaten by number four seed Jade Jones in the first of the semi-finals. The second semi-final proved equally tight as number three seed Lijun Zhou of China secured a hard fought victory against Ah-Reum Lee of Korea to secure her place in the final.

The women’s -67kg produced one of the shocks of the day as number one seed Ruth Gbagbi of Ivory Coast was beaten by the young Lauren Williams of Great Britain, 2-0. Number two seed Nur Tatar Askari of Turkey faced number three seed Yunfei Guo of China in the second sem-final. As expected, it was a very close fight with both fighters scoring the same points in two of the three rounds. Ultimately Tatar Askari did enough though and won one round to win the match and book her place in the final.

Bianca Walkden of Great Britain continued her good form by beating Aleksandra Kowalczuk of Poland 2-0 meaning the British athlete has yet to lose a round in this series. USA’s Madelynn Gorman-Shore faced Rebecca McGowan of Great Britain who could not replicate her compatriot, Walkden’s, success and Gorman-Shore won the match 2-0.

Tomorrow, fans all around the world will be able to tune in to find out who will become Grand Slam Champions.