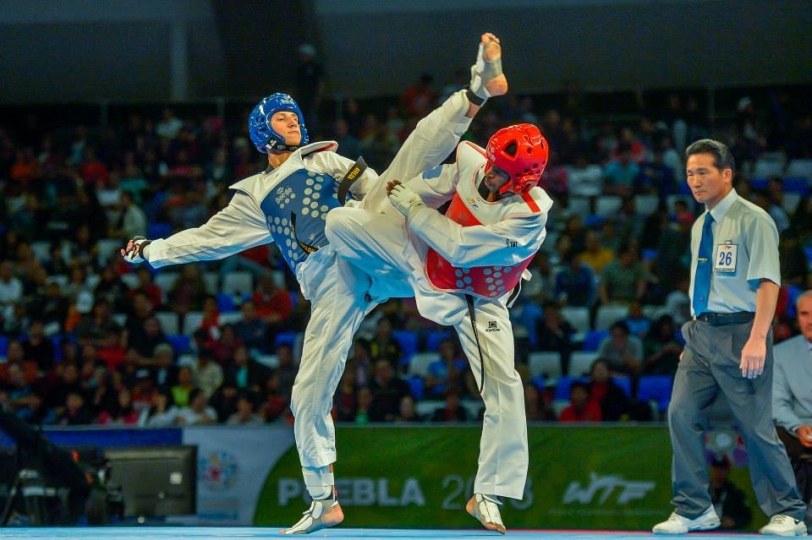 Korea took two more gold medals on the sixth day of the 2013 World Taekwondo Championships at the jam-packed Exhibition Center in Puebla, Mexico on July 20, 2013.

Korea's Dae-hoon Lee easily defeated host Mexico's Abel Mendoza 16-4 in the men's -63kg final match to earn his country the gold medal. With 28 seconds to go before the end of the third round, Kim won the match with a 12 point-gap victory.

Lee, the silver medalist at the 2012 London Olympic Games, reached the final round as he beat Chinese Taipei's Chen Yang Wei 9-7 in a semifinal match.

Spain's Joel Gonzalez, the gold medal winner at the 2012 London Olympic Games, lost to Korea's Lee 20-7 in a quarterfinal match.

Mexico's Mendoza made his way to the final round by edging down France's Stevens Barclais 4-3 in a semifinal match.

Kim made her way to the final round as she defeated her semifinal opponent, Germany's Anna-Lena Froemming, 13-7.

Japan's Hamada, the gold medalist at the 2012 Korea Open, advanced to the final match by brushing aside a stiff challenge from Spain's Eva Calvo to win a semifinal match 3-2.

For Japan, the silver medal was the first of its kind at the World Taekwondo Championships. The first World Championships were held in 1973.

Great Britain's Jade Jones, the gold medalist at the 2012 London Olympic Games, lost to Hamada in a fourth sudden-death round of a quarterfinal match.

The seventh and final day of the biennial championships, on July 21, will feature two weight categories: the men's -80kg and the women's -62kg.