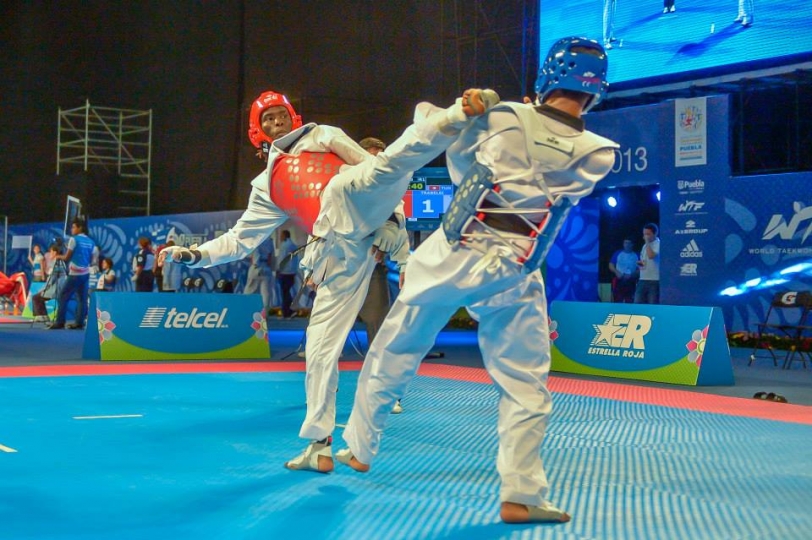 Cuba took home two gold medals and Gabon won one gold medal on the fifth day of the 2013 World Taekwondo Championships at the Exhibition Center in Puebla, Mexico on July 19, 2013.

Cuba's Glenhis Hernandez came from behind to beat Korea's In-jong Lee 5-1 in the women's -73kg final match for the gold medal.

Hernandez made her way to the final round as she crushed Canada's Jasmine Vokey, the bronze winner at the 2012 Military World Championships, 7-1 in a semifinal match.

Korea's Lee, the gold medal winner at the 2012 Asian Championships, reached the final match by defeating Sweden's Casandra Ikonen 7-3 in a semifinal match.

In the men's -87kg weight category, Cuba's Rafael Castillo brushed aside a stiff challenge from his final-match opponent, China's Zhao Yong Ma, to win the match 4-2. For Cuba, it was the second gold medal of the day.

Castillo advanced to the final round by beating his semifinal match opponent, Tunisia's Yassine Trabelsi, 9-1.

China's Ma made his way to the final match as he edged down Azerbaijan's Radik Isaev 3-2 in a semifinal match.

In the men's +87kg division, Gabon's Anthony Obame, the silver medalist at the 2012 London Olympic Games, showed his taekwondo prowess as he crushed his final-match opponent, Iran's Sajjad Mardani
10-2.

Obame reached the final match as his semifinal opponent, Slovenia's Ivan Trajkovic, the bronze medal winner at the 2013 U.S. Open, withdrew from the match.

Iran's Mardani required a fourth sudden-death round to make his way to the final round against Cuba's Robelis Despaigne, the bronze medalist at the 2012 London Olympic Games.

The sixth day of the biennial championships, on July 20, will feature two weight categories: the men's -63kg and the women's -57kg. The ongoing World Taekwondo Championships continue until July 21.