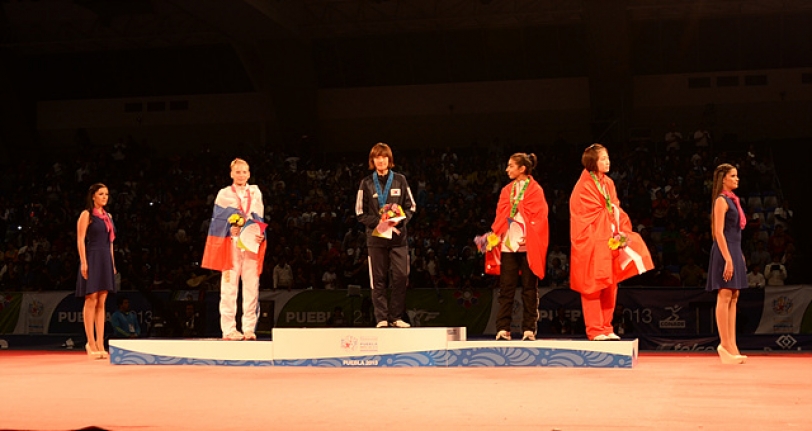 Korea showed its supremacy in taekwondo as it took two gold medals on the opening day of the 2013 World Taekwondo Championships in Puebla, Mexico on July 15, 2013.

The seven-day event, which takes place at the Exhibition Center Puebla, drew 872 athletes from 134 countries on an entry basis. The daily competitions are divided into three sessions.

In the women's -46kg weight category, Korea's So-hui Kim brushed aside a stiff challenge from Russia's Anastasia Valueva to win the final match 8-7.

Kim, the gold medalist at the 2011 World Taekwondo Championships, advanced to the final match by defeating China's Dandan Ren 8-1 in a semifinal match.

Russian Valueva, the gold medal winner at the 2012 European Championships, reached the final match by beating Tunisia's Fadia Farhani 8-4 in a semifinal match.

In the men's -58kg final match, Korea's Tae-moon Cha came from behind to beat Iran's Hadi Mostean Loron 9-8 to grab the gold medal.

Cha, a senior of Korea Nazarene University, reached the men's final round as he beat Mexico's Damian Villa, the gold medal winner at the 2013 Swiss Open, 10-3 in a semifinal match.

Hadi Mostean Loron advanced to the men's final round with a golden point in the fourth round.

The second day of the biennial championships, on July 16, will feature two weight categories: the men's -74kg and the women's -49kg.

On July 14, an opening ceremony of the Puebla championships were held at the Exhibition Center Puebla, which drew over 6,000 spectators.